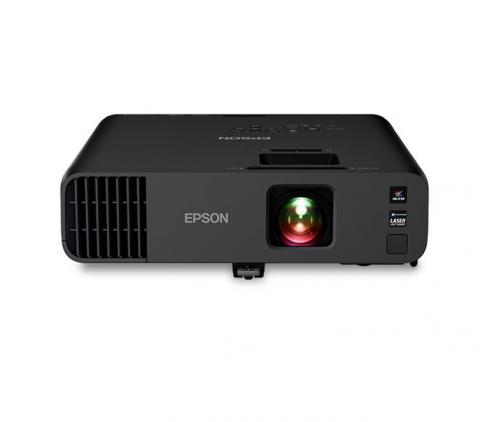 The three new models include Epson’s first-ever laser projector (pictured), which projects up to 300-inch images in Full HD 1080p and provides 4,500 lumens of brightness. By Rich Freeman
Tweet

Epson has shipped three new business projectors for hybrid and remote workspaces, including its first-ever with a laser light source.

That unit, the Pro EX10000, projects up to 300-inch images in Full HD 1080p and comes with a built-in 16W audio system, making it an ideal fit for the onsite/remote collaboration use cases likely to be commonplace after the coronavirus pandemic subsides, according to Kenny Tang, product manager for home projectors at Epson.

“A lot of businesses are doing a lot of Zoom meetings, and that means you have a lot of online participants,” he says. Users often want to display video and graphics alongside meeting attendees too. “That means you need a big screen,” Tang notes.

The Pro EX10000 also provides 4,500 lumens of brightness. “You can be in a conference room where you don’t need to shut the blinds,” Tang says. Remote workers can display movies with it as well. “You can use it for occasional home entertainment purposes,” Tang notes.

Employing a laser instead of a lamp also results in a cooler, quieter machine that’s ready for use as soon as you switch on power, he adds.

The Pro EX10000 comes with two HDMI ports and supports wireless Miracast, so users can project from a laptop, phone, or streaming sticks like Google’s Chromecast. It lists at $1,299. “That’s unheard of with this brightness and laser,” Tang says.

The lamp-based EX3280, which replaces Epson’s EX3260, offers 3,600 lumens and XGA resolution, versus SVGA on its predecessor. It has a single HDMI port but, unlike the other two models announced today, lacks Wi-Fi connectivity. The device sells for $499 MSRP.

Though flat-panel displays have been increasingly popular in recent years, Epson expects projectors to regain lost ground now that brighter, bigger, and more affordable products like the three unveiled today are reaching market.

“We think the projector demand is coming up again,” Tang says.

Epson has more laser projectors like the Pro EX10000 in the works. “We definitely see laser as the future,” Tang says.

ICYMI: Our Channel News Roundup for the Week of February 15th
February 19th, 2021

LG Gram for Business 17 (2020): Big Reasons to Like It
END_OF_DOCUMENT_TOKEN_TO_BE_REPLACED