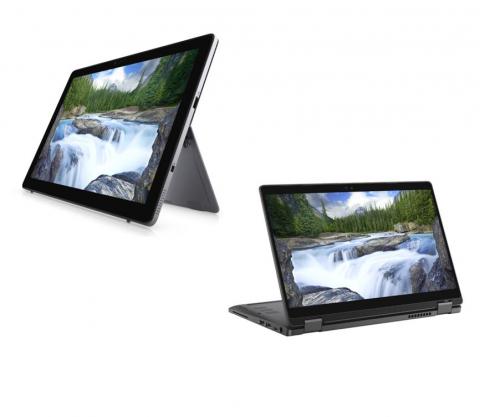 The latest additions to the manufacturer’s Latitude, Vostro, and Precision lines all seek to satisfy a craving among mobile knowledge workers for portable yet powerful hardware. By Rich Freeman
Tweet

Dell Technologies has updated its Latitude, Vostro, and Precision lines with new laptops, convertibles, and detachables designed to appeal to mobile knowledge workers.

The devices were among a wide range of client computing products announced on the second day of the Dell Technologies World conference in Las Vegas.

The new Latitude commercial PC systems are part of that product line’s 10th generation and span across its premium 7000 series, mainstream 5000 series, and value-priced 3000 series.

7000 series devices come in 13-inch and 14-inch models with new machined aluminum or carbon fiber cases, as well as a variable-torque hinge designed to allow users to open the display with one finger.

Included among the new devices is the Latitude 7200, a 14-inch detachable notebook modeled after the Latitude 7400. The latter product, which was unveiled at this year’s CES, is the smallest 14-inch convertible on the market, according to Dell, and provides 24 hours of battery life. Its new sibling offers similar specs, as well as a 233 percent improvement in WWAN speeds over previous-generation products when equipped with Dell’s 1.0 Gbps (CAT 16) option.

Latitude 5000s come in 13-inch, 14-inch, and 15-inch models with carbon fiber reinforced chassis. According to the manufacturer, they provide up to 20 hours of battery life. The Latitude 5300, a new addition to the 5000 series lineup, is a 13-inch convertible that weighs as little as 3.15 lbs. and features a 360-degree hinge. Pricing for 5000 series devices, which will be available starting Wednesday, starts at $819. The Latitude 5300 specifically sells for $949 and up.

All of Dell’s Latitude offerings are tailored to the preferences of a new generation of knowledge workers who crave thin, light, and fast notebooks. “There’s a lot more users that are mobile, so they want to have smaller products that weigh less that they can carry in their backpacks,” says Rahul Tikoo, vice president and general manager of Dell’s commercial mobility products unit.

10th generation Latitudes are optimized use with the new workspace-as-a-service solution Dell introduced yesterday as well.

Two new additions to Dell’s Vostro notebook portfolio are aimed specifically at small businesses. At just 14.9mm thin and as little as 2.6 lbs., the Vostro 13 5000 is the thinnest and lightest Vostro ever, according to Dell. Encased in aluminum, the 13-inch device features a new 2.7mm HD webcam, Waves MaxxAudio Pro software, and SmartByte technology designed to reduce buffering during videoconferencing sessions by giving them network bandwidth priority. It will be available on Dell.com starting May 16 at $849 and up.

Oriented to the needs of content creators and other users of IO-intensive software, the new Vostro 15 7000 is an all-aluminum 15-inch laptop with up to Core i7 Intel Coffee Lake-H 6-core processors, NVIDIA GeForce GTX 1650 graphics, a 97 WHr battery, and an optional triple drive expandability storage option. It too ships on May 16 and will be priced starting at $1,1149.

ChannelPro 5 Minute Roundup for the Week of January 11th, 2021
END_OF_DOCUMENT_TOKEN_TO_BE_REPLACED

Jabra PanaCast Review - Get Your Huddle On
END_OF_DOCUMENT_TOKEN_TO_BE_REPLACED