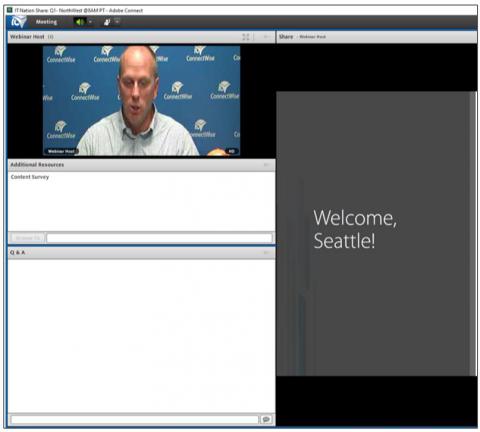 Held virtually rather than in person, due to the Coronavirus outbreak, the recent event sought to boost partner satisfaction and retention by highlighting capabilities MSPs should be using but often aren’t, according to executive Craig Fulton (pictured). By Rich Freeman
Tweet

If you’re a ConnectWise partner, chances are pretty good you’re not taking advantage of everything the RMM, PSA, and other products you use can do. Don’t feel bad, though. It’s not your fault.

“I’m not blaming anybody but myself,” said Craig Fulton, ConnectWise’s chief customer officer, during a recent meeting of the vendor’s IT Nation Share community for partners in Seattle, held virtually instead of in person due to local “social distancing” mandates aimed at slowing the spread of COVID-19. “We haven’t done the greatest job of showing you those things.”

Correcting that lapse is a priority this year for Fulton, whose team closely tracks usage patterns for the entire ConnectWise portfolio of managed services line-of-business systems. The data consistently reveals that many partners rarely venture beyond the most basic functionality.

“There’s some core features in there that we know add value that they’re just not doing,” said Fulton earlier this week in a post-show conversation with ChannelPro. “I still see features we put out over five years ago that some partners don’t even know are there.”

And that, Fulton continues, is a long-term threat to ConnectWise’s market share. “The agenda for these shows is to get our partners leveraging the investment they made in ConnectWise and learning the product,” Fulton says. “We know that usage is an important factor in retention.”

Specific examples of features that partners should be using but often aren’t, according to Fulton, include functionality in the ConnectWise Manage PSA system that draws on integration with a client’s Active Directory deployment to generate bills for MSPs with per-user pricing schemes automatically. Too few partners understand how the ConnectWise Manage dispatch portal can help them boost client satisfaction by prioritizing urgent issues as well, he continues.

“[It] allows you to triage tickets coming from the customer, get them scheduled, and manage the customer experience,” Fulton says.

IT Nation Share events are one of the ways ConnectWise introduces partners to intermediate-level skills like that, following the beginner’s overview they get during the onboarding process.

“We stand up some features and then you’re kind of on your own to go from there,” Fulton observes. “This event is like the next thing.”

Attendees get more than just product education, though. ConnectWise builds best practices discussions into the agenda as well. For the Seattle audience, that included a session on conducting quarterly business reviews and another on building a cybersecurity practice.

“I know it sounds crazy to say in today’s day and age, but there are so many people out there that say, ‘This won’t happen to me,’” Fulton says. “We want to get focused on that.”

So do ConnectWise partners in Seattle, he continues. Topics covered at IT Nation Share events are influenced by input from a facilitator who consults with a local partner advisory council. According to Fulton, customizing content for specific cities and regions is an important part of how ConnectWise keeps the shows relevant.

“When I go to Seattle and I meet with that group, they’re talking the latest in innovation, because their customers are very innovative,” he notes. “Out in the plains, it’s a little different. The internet connections are slower. The technology they’re dealing with is different.”

LG Gram for Business 17 (2020): Big Reasons to Like It
END_OF_DOCUMENT_TOKEN_TO_BE_REPLACED