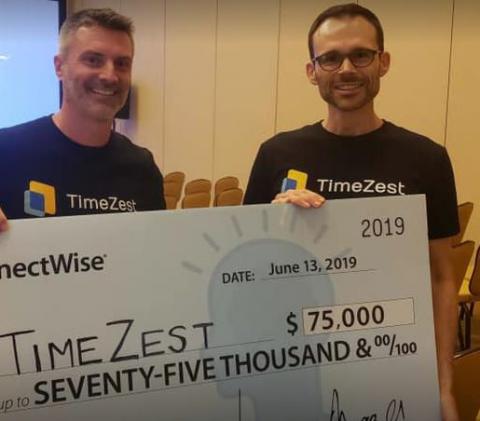 Both first-place winner TimeZest and second-place finisher Halp will take home investment capital they can use to refine and sell solutions that extend the capabilities of the ConnectWise portfolio. By Rich Freeman
Tweet

ConnectWise has named TimeZest and Halp the winners of its 2019 Pitch IT contest for startup creators of software that extends the capabilities of the ConnectWise managed services software suite.

The two companies learned that they had finished first and second, respectively, in the competition during an awards ceremony at ConnectWise’s 2019 IT Nation Explore conference in Orlando, which ended yesterday. TimeZest will now receive $75,000 of product development and marketing capital from ConnectWise. Halp will collect $50,000.

“The support tech that’s working the ticket changes the status of the ticket, and that sends out an invite to the end user,” says Jamison West, TimeZest’s CEO. That email contains a link to a calendar the customer can use to pick a time that works for them. When they’re done, the system automatically reschedules the technician’s time, adds notes about the appointment to the associated ticket, and sends the customer a second email they can use to place a meeting on their calendar.

“It’s very deeply integrated to the overall ticketing workflow within Manage, which is key for MSPs,” says TimeZest co-founder and Head of Product Brad Benner.

It also relieves a widely-suffered pain point for MSPs. Today, West notes, ConnectWise partners must switch away from the core tool they spend most of their day in to book time with clients, and rely on manual processes. That saps their productivity, and hence profitability.

“We know MSPs are intensely focused on increasing the realized rate of return, and they have to be efficient,” West says. “Our focus is really on time savings internally.”

West, Benner, and a third founder named Jason Langenauer, who is head of engineering at TimeZest and former CTO of ChartMogul, began discussing the need for a tool that brings the kind of functionality found in scheduling services like Calendly to ConnectWise Manage in February, and formed TimeZest shortly afterwards. The company is completing development of its product now, and plans to launch it this summer.

“We want to get the product right. I’m really passionate about building something that’s both elegant and super useful for partners,” Benner says.

A former MSP from Seattle, Benner is also founder of NexNow, a professional services firm focused on complex integration and migration projects for ConnectWise Manage. West, too, is a one-time Seattle MSP, as well as a ChannelPro 20/20 Visionary alumnus. More recently, he was CEO of Teamatics, a maker of cloud-based performance development software. He stepped away from that company earlier this year.

Benner and West collaborated previously in the creation of SmileBack, a self-serve customer satisfaction measurement tool for MSPs that made ChannelPro’s Vendors on the Vanguard list of emerging and underappreciated products in 2017.

A more established company launched two years ago, Halp makes a solution that synchronizes popular chat applications bi-directionally with service ticketing systems. MSPs can use it to turn Slack and Microsoft Teams specifically into tools for serving and communicating with their clients, according to Fletcher Richman, Halp’s co-founder and CEO.