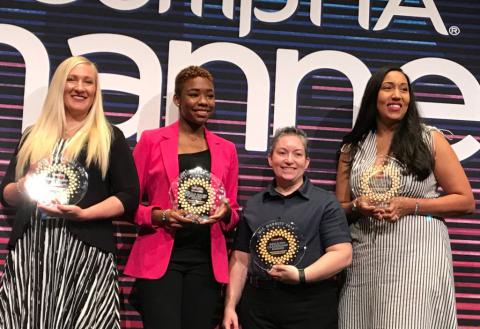 Recognized at the industry association's 2019 ChannelCon show, the four honorees include this year’s recipient of a scholarship named after former ChannelPro Executive Editor Cecilia Galvin, who died two years ago. By Rich Freeman
Tweet

CompTIA’s Advancing Women in IT (AWIT) community has handed out its second annual set of Spotlight Awards honoring leaders, mentors, and visionaries committed to encouraging women to pursue careers in technology.

The awards ceremony took place on the opening day of CompTIA’s annual ChannelCon event, which is now underway in Las Vegas.

Included among the honorees was Destiny Adams (pictured, second from left), who received this year’s CompTIA/ChannelPro Cecilia Galvin Scholarship Award. Named after former ChannelPro Executive Editor Cecilia Galvin, who passed away in 2017, the latter prize grants $5,000 to a standout high school graduate interested in launching an education in technology.

Three additional Spotlight Awards went to Sarah Massengill (pictured left) and Sarah Merritt (pictured second from right), both of whom serve in the U.S. Air Force, and Rokeya Jones (pictured right), a senior director of product management at Microsoft.

Like her predecessor Sarah Johnson, who won the inaugural CompTIA/ChannelPro Cecilia Galvin Scholarship Award last year, Adams already shows great promise as a future IT luminary. Since graduating from North Springs High School in Atlanta at age 16, she has mentored or trained over 1,000 girls in science, technology, engineering, and mathematics (STEM) through past service as global youth ambassador for advocacy group STEM Atlanta Women and her current work as STEM youth coordinator for Atlanta’s African-American Panoramic Experience (APEX) museum, among other endeavors.

Adams also heads two separate organizations dedicated to assisting young women like herself: Destiny Adams International, which runs coding camps and presents keynote speeches, and the Destiny Adams Foundation, which connects students with mentors in both STEM and non-STEM fields.

In addition, Adams is a contributing author of the 2017 book Embracing STEM Smarts: An Encouraging Guide for Young Ladies Who Have a Passion for STEM. A second book called Finding Your Destiny: A Guide to Becoming a Girl Boss is due to be published shortly.

Adams’s overriding mission is to build awareness of STEM opportunities among her peers and inspire them to ignore widely held stereotypes about IT being a field for men only. Mentorship is her primary vehicle for realizing that goal.

“It’s important to have someone who has a little bit more experience than you to be able to guide you,” she says, especially when experiencing self-doubt. “When you have those moments where you’re trying to decide is this really for me, you have someone there who can lift you up or keep you motivated.”

The IT industry badly needs more mentors like Adams, according to Nancy Hammervik, CompTIA’s executive vice president for industry relations. “The generation behind us doesn’t necessarily see themselves in a career in tech,” said Hammervik during the awards ceremony.

Adams’s passion for technology began in middle school when she took an HTML/CSS coding class through Black Girls CODE, a non-profit that encourages interest in computer programming and other STEM topics among girls of color.

“I think the thing that kind of sparked my interest or kept me motivated was just to see how you could type in a few lines of information and then display something,” Adams recalls.