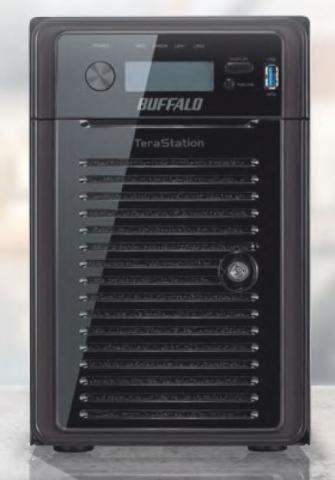 Priced and scaled for use in small office environments, the compact new units feature hardware RAID and a dedicated solid-state drive for their Windows Storage Server host OS. By Rich Freeman
Tweet

Called the TeraStation 5610DN WSS, the new product line features hardware RAID technology for faster performance, as well as a dedicated solid-state drive for the unit’s Windows Storage Server 2012 R2 Standard Edition operating system. Storing data on hard disk drives and the OS on a separate SSD saves administrators time by enabling them to re-configure RAID implementations without updating the host OS as well, according to Chris Hall, an interim marketing manager at Buffalo Americas.

“You can change the RAID all you want and you don’t have to do a re-install,” he says.

Optimized for use in small office environments, TeraStation 5610DN WSS arrays pack six bays—pre-populated with hot swappable 2 or 4 TB SATA hard drives—into a compact case small enough for use on a desktop. Processing power is provided by a quad-core 2.41 GHz Intel Celeron CPU, and the new systems come with 4 GB of DDR3 memory as well.

Hall calls attention to the Windows Storage Server operating system, however, as one of the new product’s most notable features.

“A lot of vendors are leaving that market,” he says, mostly due to concerns about the size of Microsoft’s license fees.

“We have a really good deal with Microsoft on the licensing, so we’re able to keep our costs down,” Hall states. The new TeraStations come in a 12 TB model that sells for $3,399.99 and a 24 TB model that lists at $3,999.99. According to Hall, both products are swift, cost-effective storage options for SMBs that don’t need the capacity and functionality provided by bigger, more sophisticated arrays.

"If you’re a small business of maybe four or five users, do you really need to spend three or four grand on a high-end server?” Hall asks, adding that the introduction of the TeraStation 5610DN WSS is the latest sign of Buffalo’s ongoing commitment to the Windows Storage Server platform.

“What we’re basically telling people is ‘we’re here. We’re not leaving,’” he says.

That goes for more than just the Windows corner of the storage market too, he continues. Resellers have been asking Buffalo for newer solutions with latest-generation capabilities, and today’s launch, along with that last month of a 12-bay, 120 TB system targeted at larger businesses, are the leading edge of a wave of faster, more powerful products slated to arrive next year.

Available for ordering immediately, TeraStation 5610DN WSS units will be in stock with leading distibutors by the end of the week.