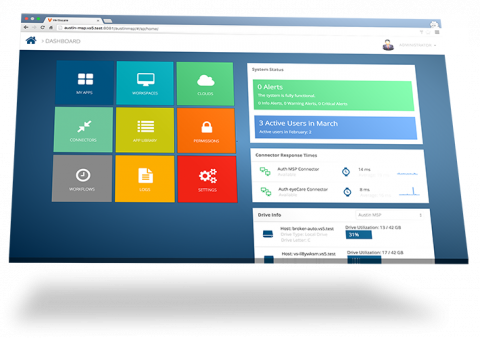 The dual moves reflect a strategic shift away from the heavily commoditized infrastructure-as-a-service market toward more promising opportunities in workspace-as-a-service and beyond. By Rich Freeman
Tweet

Announced at the CompTIA ChannelCon conference presently taking place in Hollywood, Fla., the dual moves are part of a strategic shift away from the commoditized Infrastructure-as-a-Service market and its steadily declining prices toward more profitable solutions that combine cloud infrastructure with hosted applications in areas like telephony and unified communications.

“We’re moving towards being a product suite and delivery solution, kind of a one-stop-shop if you may,” says Neverfail MSP channel chief Chris Wiser.

The freshly branded company will back those solution bundles with services, adds Jon Senger, formerly co-founder and CTO of Vertiscale and now Neverfail’s chief architect.

“Being able to provide that level of support and now software that’s all under one roof is pretty unique,” he says, adding that the pre-packaged infrastructure/software/service solutions Neverfail plans to offer are the way of the future in the cloud computing marketplace.

Vertiscale and the company now known as Neverfail have been working together closely since late last year, months before the Vertiscale solution reached general availability in early March. At the time, Senger recalls, beta testers were clamoring for guidance on where and how to host the WaaS offering. One partner suggested Artisan Infrastructure as an option worth investigating, and since the company was located nearby Senger followed up on the tip.

“The relationship just blossomed because Artisan is such a natural fit for this type of technology,” he says.

For Neverfail, adding a proven WaaS product to its existing solution roster provides a shortcut into a market set to reach $8.2 billion globally by 2020, according to Global Industry Analysts Inc. Vendors including Citrix and Mountlake, Terrace, Wash.-based startup Infinite Ops Inc. have both been aggressively pursuing their own workspace strategies in recent months.

Senger, meanwhile, expects becoming part of Neverfail to result in faster adoption of Vertiscale’s flagship solution, as buyers will now have easier access to pre-integrated hosting services. There will also be a larger, more experienced sales and marketing organization behind the system, he adds. Indeed, though announced today, Neverfail’s acquisition of Vertiscale closed roughly a month ago, and it’s already had a dramatic impact on subscriptions.

“Our sales have increased over 300 percent in the past four weeks,” Senger says. “It’s quite a ride and we’re accelerating very, very quickly.”

Wiser agrees. “There’s so much opportunity in being connected with a best-in-class infrastructure solution that it’s opening up massive amounts of doors for the Vertiscale platform,” he says.

Though originally targeted at healthcare organizations in need of a HIPAA-compliant means of delivering data and applications to increasingly mobile users, Vertiscale’s WaaS solution, which will henceforth be known as Neverfail Workspaces, quickly attracted interest from IT providers with clients in other industries facing similar regulatory mandates and mobility requirements, or who simply wanted a more effective and secure alternative to VPN for remote access. As a result, Senger says, Vertiscale began re-positioning itself as a provider of workspaces for users in any industry almost as soon as its product launched five months ago.

While Senger is responsible for Neverfail’s entire solution portfolio now in his new role as chief architect, driving continued adoption of Neverfail Workspaces will be his top priority over the next six months. Further integrating the solution with the rest of Neverfail’s offerings will be another near-term focus area, though Senger emphasizes that as far as underlying cloud infrastructure goes buyers remain free to host the system on the platform of their choice despite today’s announcement.

Workspaces are far from the last addition to Neverfail’s solution lineup. According to Senger, a new VoIP solution is coming within the next 45 days, with additional products currently under development to follow in 2017. A new management interface that will enable technicians to administer all of those systems through a single console will arrive next year as well.

Jabra PanaCast Review - Get Your Huddle On
END_OF_DOCUMENT_TOKEN_TO_BE_REPLACED