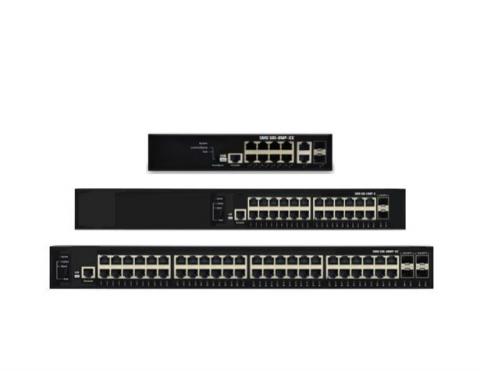 The new SDX 8110 family, which offers the increased Power over Ethernet budget such use cases require, arrives days after the introduction of ADTRAN’s Intellifi mesh Wi-Fi solution for homes and small businesses. By Rich Freeman
Tweet

SDX 8110 units are available in 8-, 24-, and 48-port configurations, and provide Gigabit Ethernet connectivity, per-port and per-queue traffic shaping capabilities, and per-port and per-queue policing. Enhanced traffic matching capabilities include QoS control lists that can match Ethernet frames, including outer and inner tag parameters, and then manipulate QoS, vLAN, and policy settings in the IP packet or Ethernet frame.

According to Sawyer, demand for switches with such features has been rising among ADTRAN partners, who are rolling out voice, wireless networking, and video surveillance practices in rising numbers. “We have a lot of providers that are moving that direction,” she says. “They’ve been asking us for these higher PoE switches now for about a year.”

Word of the new SDX 8110 line arrives days after the conclusion of ADTRAN’s annual Connect conference, which took place last week. Announcements at that show included the introduction of Intellifi, a turnkey mesh Wi-Fi solution for home and small business users.

Produced by ADTRAN’s SmartRG unit, the system is an alternative to the vendor’s enterprise-oriented Bluesocket networking portfolio for businesses that just need a handful of access points. ADTRAN acquired SmartRG last December.

“Intellifi is really meant for the corner coffee store, the local beer store that you might go to, or a dental facility that maybe is only 1,000 or 2,000 square feet,” Sawyer says. “There’s a lot of those out there.”

Included in the Intelllifi solution is a new compact, wall-pluggable, mesh access point called the SE80ac. Users can deploy up to five of those devices in a single environment. Equipped to support wireless, Ethernet, coaxial, and powerline connections, SE80ac hardware is self-organizing.

SE80ac mesh kits are currently in customer trials and scheduled to become generally available in the fourth quarter of the year. Additional mesh kits featuring tri-band capability and Wi-Fi 6 (802.11ax) are on the roadmap for 2020.

Other Intellifi features include a remote management interface with support for analytics-based predictive customer care and air-time management to balance surfing, voice, and video services.

The complete package, according to Sawyer, makes adding subscription-priced small office or home-based microbusiness networking services easier for channel pros new to those fields. “It’s a simple way to start getting into the wireless marketplace without having to have a lot of experience and knowledge,” she says.

Intellifi is the most recent step in long-term efforts by ADTRAN to help traditional VARs become managed service providers while attracting existing MSPs to its partner base. That initiative began with the introduction of ADTRAN’s ProCloud networking-as-a-service solution and expanded in April 2017 with the addition of ProCloud offerings for unified communications, security, and analytics. A managed firewall service joined the product family shortly after that.

ICYMI: Our Channel News Roundup for the Week of January 23rd, 2023
END_OF_DOCUMENT_TOKEN_TO_BE_REPLACED