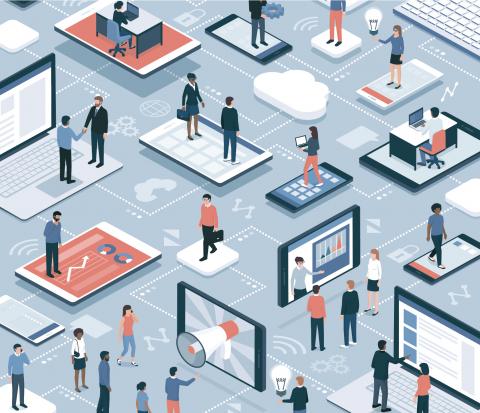 How to build professional relationships to drive growth. By Geoffrey Oldmixon
Tweet
Reader ROI:
PROFESSIONAL NETWORKING builds connections and relationships that drive growth and should be part of a marketing strategy.
TO BE SUCCESSFUL, focus on the relationship and how you can solve a pain point rather than make a sale.
LEVERAGE COMMUNITY and industry events, both in-person and virtual, and have a strategy to optimize your time spent.

MOST CHANNEL PROS know plenty about the kind of networking that moves data around. They’re often less adept, however, at the kind that builds connections and relationships for new opportunities. According to some successful consultants in the field, it will take knowledge about both kinds of networks to truly grow in a post-pandemic market.

There are countless ways to define professional networking, but one thing it’s not is sales.

“When we think about sales, we’re thinking about that ‘final sale,’” explains career coach Alaina G. Levine. Her company, Quantum Success Solutions, is a consultancy for what she calls “STEM-educated professionals.” For her, networking is what takes place before and after the sale.

At its most basic level, networking is essentially the act of meeting people and establishing business contacts. Levine describes it more exactly as “long-term relationship-building.”

“Networking is the most honorable endeavor in which you can engage because, at its heart, it’s built on a platform of generosity,” she says. “It’s asking, ‘What can I do to solve a problem for you or help you advance your goals?’”

Lori Tisinai isn’t a career coach, yet her advice to her peers echoes that of Levine.

“Networking is going out and meeting other people [who] either work for a business or own one,” says Tisinai, entrepreneur and owner of Computer Concepts, an IT services and training firm in Lake Bluff, Ill. “When I’m networking, I’m not pitching something to somebody; I’m learning about them. Who do I know that I can connect them with? How can I help them solve a problem?”

It may seem like trite advice to “find opportunities through professional networking,” but indeed, it’s a marketing strategy, with time and money well spent—better well spent, in some cases, than traditional advertising.

“I still believe in the old-school style of shaking hands and taking numbers,” asserts Michael Goldstein, president of LAN Infotech, an MSP in Fort Lauderdale, Fla. So much so, in fact, that he has two full-time employees whose roles are specifically to develop “community relationships.”

“We’re always looking to use marketing development funds for networking opportunities,” Goldstein says. “And I look at [their salaries] as what I might have spent on advertising. These guys are walking ads out there.”