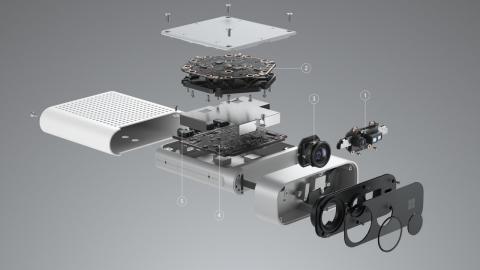 The reinvented Azure Kinect and its associated developer kit are specifically designed for commercial use. By James E. Gaskin
Tweet

LIKE A GOOD GAME VILLAIN, Kinect, the Xbox accessory Microsoft introduced in 2009 that let players control games via body motions and voice, has risen from the dead in the form of the new Azure Kinect.

When Microsoft pulled the plug on the original Kinect in 2017, it had sold around 30 million units and reviewers hailed the product. Even though businesses had come to use the device in all sorts of ways not anticipated by its inventors, it lacked that one killer game to justify the cost to consumers.

Now the reinvented Azure Kinect and its associated developer kit (pictured) are specifically designed for commercial use, and artificial intelligence and automation may be the killer apps Kinect was looking for. “If you knew the original Kinect, it was very much associated with gaming in your living room,” says Matt Fleckenstine, leader of the mixed reality group at Microsoft. “Now we’re talking about how can we help to revolutionize next-generation manufacturing and logistics or healthcare or retail.”

Microsoft bills Azure Kinect as having “AI sensors for building computer vision and speech models.” Fleckenstine describes it as “basically a developer kit that we’ve built that takes a lot of the same sensors and capabilities we have in HoloLens and puts them into this packaged device."

The software development kit is not limited to working with Azure but includes a strong bias in that direction. And this push makes sense, because many of the tools for the Kinect overlap with Azure tools built to support Internet of Things devices running on the Azure cloud.

We see this as kind of a way to add an intelligent device at the edge that can all be part of a broader kind of IoT solution deployment.—Matt Fleckenstine

“We’ve also spent a lot of energy … enabling … third-party apps to be built for mixed-reality experiences as well as our Azure services, in particular around our cognitive services around speech and vision,” Fleckenstine says.

Early use cases include speech-to-text applications (there is no speaker on the Kinect) and facial recognition, in which the Kinect is the front end for Azure’s software modules recognizing emotion in facial images. Other use cases include physical therapy utilizing the Body Tracking SDK (it sees the outside of a body and can simulate the internal joint motion to potentially speed rehabilitation) and logistical support by viewing, identifying, and tracking boxes and goods on pallets or in other locations.

Fleckenstine outlines a retail scenario, for example, that relies on Azure Kinect's strength. "It will be able to watch down an aisle and see when certain things are getting low and need to be restocked, then send alerts."

He adds, “We see this as kind of a way to add an intelligent device at the edge that can all be part of a broader kind of IoT solution deployment.”

By every measure, the completely upgraded model is far superior to the previous Kinect. The Azure Kinect Development Kit includes new hardware that’s smaller and lighter, while doubling (or better) the video resolution. The depth camera now supports a resolution of 1024x1024 at 1 MP. The color camera jumped up to 12 MP with a resolution of 3840x2160, or 4K. Field of view has more than doubled. The microphone array, four in the original Kinect, now includes seven updated mics in the new Kinect DK.

All these upgrades fit inside a box that is just under 5 inches long and 1.5 inches thick.

Current retail price for the Azure Kinect DK is $399. Units are only available in the U.S. and China currently.

ICYMI: Our Channel News Roundup for the Week of January 20th
END_OF_DOCUMENT_TOKEN_TO_BE_REPLACED