ICYMI: Our Channel News Roundup for the Week of October 30th 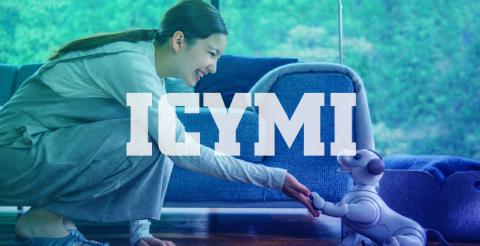 Cisco ♥ ConnectWise, VMware ♥ VeloCloud, we all ♥ Halloween candy, and more insights from the week that was in IT. By James E. Gaskin
Tweet

Halloween came and went, along with your diet when kids brought home bags full of chocolate. Fear not, because fat cells are exhaled during sleep, and you get an extra hour of same when Daylight Savings Time “falls back” to whatever DST isn’t.

Cisco’s Partner Summer 2017, in Dallas, overflowed with information, deals, shrimp buffets, souvenir cowboy hats, meetings both loved and loathed, and some news that slipped from thought when the open bar bell rang. That said, we’re catching up on some news for Cisco et al along with tidbits from Avaya and VMware and so, so many more.

Cisco and ConnectWise and AI. Cisco and ConnectWise, with an ever-larger Venn diagram of overlapping client populations, formally announced the ConnectWise Unite with Cisco portal. CUC (is that the initials they really wanted?) helps Cisco partners interested in starting or growing a managed services business wrap up networking, security, and collaboration services neatly.

Cue the comedians: Cisco also announced Cisco Spark Assistant, which it claims is the first AI-powered, enterprise-ready voice assistant for meetings. Sample joke: Now meetings will have more smarts in the setup than the execution. Tip your waitress.

Avaya raises an AI hand. Not to be outdone, Avaya announced the A. I. Connect initiative. Focus to start is on effortless self-service, smart routing, agent augmentation, interaction insights, and enhanced workforce optimization. Sounds pretty smart.

Does VMware + VeloCloud = VMcloud? VMware announced a definitive agreement to acquire VeloCloud Networks. The SD-WAN company should be folded into the VMware mothership by fiscal Q4 of 2018. Not yet done, but soon.

Other products want some love, too. Since there’s been so little phone news lately, welcome to Samsung’s “business-first” Galaxy Note8 Enterprise Edition (pictured). Easier deployment and management, along with enhanced security, make the reason for the $994 price. This must be the most expensive phone released recently, right?

More phone news? OK. ASUS says its ZenFone 4 family is now available in North America, including the ZenFone 4 Pro, ZenFone 4, and ZenFone 4 Max. (Why are so many products named Max? Couldn’t at least one be named Ruby?)

Tagged as “Hangouts Meet Hardware,” Google introduced a new meeting room solution including a touchscreen controller, 4K sensor camera with 120 degree field of view, speakermic, and an ASUS Chromebox to control them all.

Fujitsu and NetApp pulled the covers off the new NFLEX converged infrastructure solution.

Atera, they of the mashup of cloud-based RMM and PSA into one program, announced enhancements and upgrades, including 24/7 app support offering real-time chat with Atera specialists.

Schneider Electric, makers of APC UPS systems, introduced Smart-UPS with APC SmartConnect, which it claims is the first and only cloud-enabled UPS for distributed IT systems.

Other news needs some validation, too.

The stats they are a ticking, aka, this week’s stats ticker:

Re-attack of the Sony Robot Dog. Who needs a real dog rescued for a few bucks from a shelter when you can have the new version of Aibo? The AI-pooch from Sony went off the market in 2006, after seven years of sales and two (needed) upgrades. Rejoice! Aibo has returned, all spiffed up with new features. Price tag? $1,740, or 198,000 yen.

One feature? Aibo can take pictures of everything it experiences and then compile a scrapbook of loving owner interactions. Or, perhaps, photos of owners looking at phones and ignoring the robo-mutt.

Who is this perfect for? Silicon Valley startup millennials flush with exit cash but no friends. Of course, even a robot dog needs more care than any such people probably have time to give.

This just in: New Silicon Valley Aibo eDog walking service being funded by Anything Goes! VC partners should go to IPO in six weeks for $47.50 (benchmark estimate).

Jabra PanaCast Review - Get Your Huddle On
END_OF_DOCUMENT_TOKEN_TO_BE_REPLACED