ICYMI: Our Channel News Roundup for the Week of October 2nd 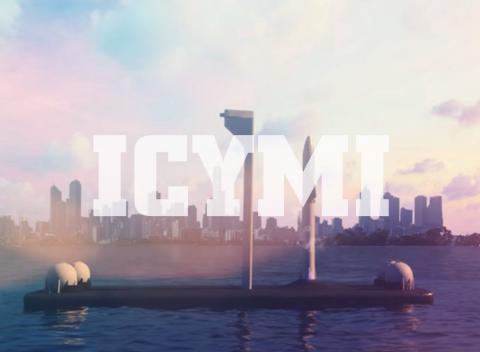 Oracle tried, but failed, to fill the news bucket itself, enabling Intel, Google, Microsoft, and many, many others to get in on the act too. By James E. Gaskin
Tweet

October, the Halloween month, snuck in while we were distracted by too much news, too much of it sad. Soon we’ll be back to shame-Instagramming the first Christmas displays we see weeks before Halloween, getting used to fall, and pinning our hopes on a better year in 2018. All while juggling the annual fourth-quarter sales and revenue dash, of course.

Big news for mostly big corps at Oracle OpenWorld in San Francisco with all the keynotes, VIP meet and greets, parties, more VIP meet and greets, more speeches, shrimp bars, and more salespeople chasing prospects through the halls of Moscone Convention Center. Don’t believe the reports of TP rolls printed with “almost as soft as the new Oracle Cloud” until you see one for yourself. Allegedly.

But not even Oracle can fill the news buckets all by itself. Some bits from Intel, Google, Microsoft, and more, along with many Oracle details, await your perusal.

Tired of your data? Archive it with the Archive Storage service. Integrated DNS from Dyn, 25Gb network infrastructure, and packaged migrations from other customers continue the cloud pump-up. Big Data folks will like enhancements to the Oracle Big Data Platform Cloud, including better analytics and AI capabilities.

But wait, there’s more love from Larry. Developers got plenty of love from Oracle, in fact, including new materials in Oracle’s developer.oracle.com portal and more GitHub involvement.

Blockchain still wants to take over the world, and the Oracle Blockchain Cloud Service may help.

If you consider yourself human capital, then the Oracle Human Capital Management (HCM) Cloud portfolio will smother, er, cover you like a blanket. Functionality for recruiting, health and safety, compliance, risk, and more treat employees with all the care of a life-cycle managed laptop.

Big Larry himself rolled in to unveil the Oracle Autonomous Database Cloud packed with machine learning and other smarts, all built on top of Oracle Database 18c.

Oracle Exadata X7 gets faster thanks to in-memory performance from shared storage.

Last but not least, Oracle NetSuite got tuned up, including the release of SuiteSuccess industry solutions for IT VARs and solution providers.

Companies besides Oracle had meetings this week as well, including the IoT Solutions World Conference, where Intel announced the launch of Intel Secure Device Onboard (Intel SDO). Soon you can bring IoT devices online in seconds rather than hours.

Sometime in the first half of 2018 Intel will combine platforms, software stacks, and ecosystems to enable faster deployment of customized field programmable gate array (FPGA) solutions.

Microsoft raises a hand. Remember them? Microsoft launched some apps for iOS and Android, including Microsoft Edge for iOS/Android and Microsoft Launcher for Android. Just another reason to love the Windows 10 Fall Creators Update.

Non-ironically, Microsoft announced the era of Windows Mixed Reality will begin on October 17. Samsung has a headset, AltSpaceVR teams up, and the StreamVR catalog gets plugged in.

Laggards rejoice: the Firefox Extended Support Release for Windows XP and Vista users kicks the can down the road all the way to June 2018.

Google talks hardware. If your pocket is tired of your current smartphone, you might try filling it with the Google Pixel 2. Match your pocket size with the 5-inch model or the 6-inch Pixel 2 XL. Both sport Android 8.0 Oreo, a better camera, search upgrades, and a smarter Google Assistant.

Don’t forget these folks, either:

Mojo Networks and its Cognitive WiFi opened up an MSP program, along with a new monthly-based pricing structure.

Arrow Electronics and Cypress Semiconductor mixed and mingled and out came the Titanium board, an IoT platform for developers to create products using Wi-Fi, Bluetooth Low Energy, cellular, and LPWAN technologies. Get boards in November.

Channel pros preparing to lock themselves in the Budget Dungeon(tm) and ruin their eyes with spreadsheets may find some hope in Gartner’s projection that worldwide IT spending will increase to $3.7 trillion in 2018. Enterprise software and IT services lead the charge, a boost of 4.7 percent from 2017 estimates.

International Data Corporation (IDC to friends) estimates a market of nearly $16.2 billion in 2021 for software-defined storage.

Sweating just a bit over data breaches? Join the club. Ponemon and Centrify launched a global IT survey that discovered less than half of IT professionals are confident they can prevent, detect, and resolve the next data breach. Worse, 56 percent fear a breach will put their heads on the chopping block.

AI-powered threat prevention tool maker Cylance announced the results of a report titled Artificial Intelligence in the Enterprise: The AI Race is On. 652 IT decision makers in the US, Germany, and France declared AI optimism high and said they’ll continue to invest. Nearly 80 percent say AI is a top priority, and 87 percent see AI tech as a competitive advantage.

Nobody dreams bigger than Elon Musk. Technology’s official Big Thinker, Elon Musk (E-Man to his friends, maybe), has taken us fast (HyperLoop), down (The Boring Company), and in style (Tesla). Now he wants to take us up—way, way, way up.

Newest brainstorm? The BFR, for Big Effing Rocket. No, not the one to send E-Man and his friends to Mars one day, but one to zoom from New York to Shanghai in 39 short minutes, or just over eight listens to Elton John’s Rocket Man. Actually, it might be the same rocket, like a bus that can go downtown or across the country.

Bypass LaGuardia Airport and go to a floating launch and landing platform, perhaps with a good view of the Statue of Liberty. Take off from there, survive the crushing G-forces of accelerating to 18,000 miles per hour, and show your passport in Shanghai 40 minutes later. All this for about the same price as an airline seat today.

Or not. Anyone else wonder if E-Man goes home, closes the door, turns to his dog, and says, “Can you believe they fell for that nonsense?” Which is a shame, because we can’t wait to see how thrilled the Defense Department will be about intercontinental ballistic missiles launching from places like China and the Middle East on a regular basis. E-Man says we don’t have long to wait—the BFR could launch in 2022. Or not.