ICYMI: Our Channel News Roundup for the Week of October 14th 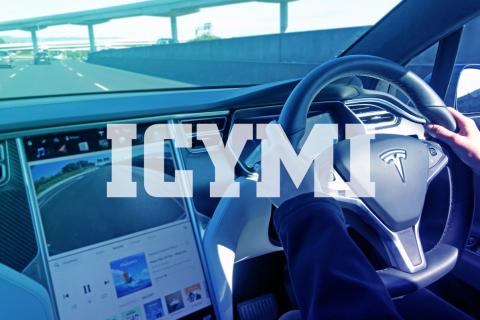 Desktop analytics from Microsoft, SMB-friendly products from Check Point and Commvault, and a glimpse into the drawbacks of driving a “laptop with wheels” were all among the stories we’ve just now managed to bring your way. By James E. Gaskin
Tweet

Let’s see, we have wildfires on one coast and storm flooding on the other. Must be basketball season! This week wraps up the NBA preseason, so get the important things ready for the season opener next Tuesday: your fantasy league picks. 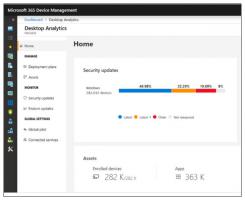 News from out Redmond-way. If you use Microsoft’s System Center Configuration Manager, you’ll be glad to hear that Desktop Analytics (pictured) is now generally available. Cloud-based AI perusing aggregated insights from millions of Windows endpoints helps keep your devices updated and serving up kitten videos at full speed.

Windows for IoT supports a range of new processors now, including the NXP i.MX family.

As more people move more information to Azure, files also keep getting “more” as well. Hence the GA for larger, more powerful file shares. You no longer need to register your subscription to get the large file shares feature either.

Microsoft Garage attempts to recreate a startup experience with small teams and few limits, except for the 12-16 weeks they get to develop a product. One result? The new Digital Marketing Center to help SMBs save time managing campaigns across digital media.

Microsoft and Nuance Communications teamed up to weave Project EmpowerMD Intelligent Scribe Service and the Dragon Medical platform together to cut the crushing paperwork burden of the modern physician.

News from Securityville. Symantec revved up its endpoint catalog and tagged it Symantec Endpoint Security. Protection, detection, and response in a single package, along with attack surface reduction and more.

Gamer keyboards move to a new arena with the Razer Blade 15 gaming laptop (pictured) with optical keyboard. The keyboard uses an infrared light beam to detect keypresses for greater precision and speed compared to conventional laptop keyboards. NKRO and anti-ghosting (if you know, you know).

Jabra played along with Zoom as well, announcing the Jabra PanCast intelligent Panoramic-4k plug-and-play video solution. Works with the new Zoom Rooms Speaker Switching telepresence capability. Now you don’t have to be physically in a meeting to “enjoy” it.

Zoho fans should like Catalyst, the newly announced full-stack serverless platform for developers. Develop vertical apps quickly, then test and deploy them while letting Zoho worry about global standards, infrastructure, and support.

If you’re a network tech, the idea of billions of IoT devices chattering away makes your teeth hurt. Hello AtomBeam Technologies and it’s data compaction software to reduce IoT data transmission by 75% with (or so they say) virtually no added latency. A 2x transmission range bump and 25% improved battery life won’t hurt, either.

ReFirm Labs rolled out its Fall 2019 updates to the Centrifuge Platform that manages the security of IoT device firmware.

Vendor news without the products. Welcome Michael Goldberg, the new vice president of sales at Axcient.

Intel, getting deeper into 5G edge computing, pulled out the checkbook to acquire the Smart Edge intelligent-edge platform business from Pivot Technology Solutions. When the deal closes in a few weeks, the 25 Smart Edge employees will join Intel’s Network and Custom Logic Group.

Zendesk’s revamped partner program let’s partners do what they do best, whether that’s refer, resell, implement, develop, integrate, or any combination of the above, depending on the opportunity.

Rackspace tapped Seismic to update its Rackspace Partner Portal, which employs gamification. Just hope we don’t get that “go to jail, go directly to jail, do not pass go, do not collect $200” card.

Ingram Micro will open its fourth IT Asset Disposition Processing Center, its second in the Indianapolis area. The 200,000 square foot facility will create over 150 new jobs.

RingCentral will deliver a new wave of UCaaS products (like those pictured) to SYNNEX’s U.S. channel partners.

Datto’s fourth annual Global State of the Channel Ransomware Report has some unpleasant but important info. More than 1,400 MSP decision makers supporting SMBs found that ransomware remains the most common cyberthreat and that attacks are on the rise. 85% report attacks against their clients over the last two years, up from 79% in 2018. However, only 28% report their SMBs are “very concerned” about this threat. 92% say that clients with business continuity and disaster recovery solutions are less likely to experience significant downtime during an attack. Four out of five recovered in 24 hours or less. In addition, ransomware hackers are targeting the MSPs themselves, says about 80% of respondents.

A new study, The Evolution of Workplace Communications, by Spiceworks, examines internal and external communications. Secure? Not really. 69% of businesses report employees using unencrypted SMS texts internally and externally. Only 32% have adopted secure communications platforms and another 12% are considering adoption by 2021. Healthcare has the highest rate of secure comm use, at 60%. Nice to know that only 40% are possibly blasting personal medical information via open text. Not surprisingly, employees report feeling overwhelmed by communication options in the workplace, but 67% of businesses now use real-time business chat apps, often with encryption.

Proofpoint announced a new survey from The Economist Intelligence Unit titled, “Cyber Insecurity: Managing Threats From Within.” More than 300 corporate execs, including CIOs and CISOs, from North America, Europe, and Asia/Pacific responded. Surprise: 99% of targeted cyberattacks depend on human interaction to be successful. 85% of executives agree to blame users rather than technology or process. One might think they should upgrade those processes, since 60% have experienced at least four data breaches in the past three years. Results? 33% lost revenue, 30% lost clients, and 30% terminated involved staff. 96% say their boards and C-suite denizens strongly support efforts to control cybersecurity risks. Yet 47% say it’s likely or extremely likely they will face at least one data breach in the next three years. 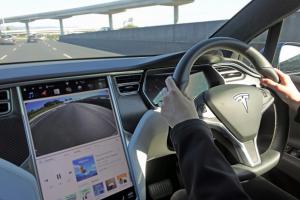 When your “laptop with wheels” behaves like a laptop with wheels. Nobody disputes Teslas are the highest-tech cars on the road, which is why some consider them “laptops with wheels.” Unfortunately, laptops can sometimes suddenly impersonate bricks. Annoying when your laptop bricks, but when your Tesla bricks, you are stuck.

Vice talked to three independent Tesla repair folks and the problem seems to be a flash storage chip called the eMMC. Tesla writes the logfile to this storage chip, and it gets written and overwritten so often the flash memory wears out.

Flash memory offers many advantages, but overuse will kill them. When it kills this storage chip, your console screen goes black and you may be able to drive your car, but you can’t charge it again.

Corrupted logs are no joke in any system. In a Tesla, you’ll need a tow truck and maybe a new chip salvaged from a wrecked Tesla.