Women in IT, Say Ingram Micro Panelists, Are Doing it For Themselves 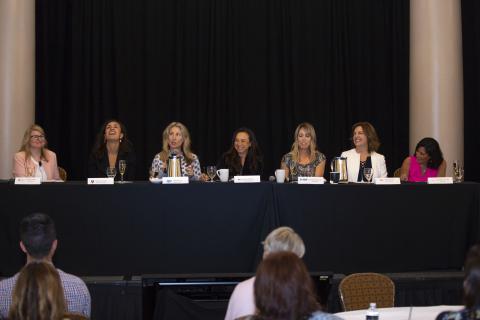 Speakers at this week’s Ingram Micro Cloud Summit said women pursuing a career in IT can defy the odds stacked against them, but will need persistence, determination, and faith in themselves to pull it off. By Rich Freeman
Tweet

Despite the odds stacked against them, women can build thriving careers in IT, provided they have the determination, grit, and self-confidence it requires.

Such was the verdict on the state of women in technology today during a discussion on that topic held yesterday at the 2018 Ingram Micro Cloud Summit, which is underway now in Boca Raton, Fla.

Just how tall the odds against women pursuing technology careers are today was made clear by figures cited by moderator Michelle Bailey, group vice president, general manager, and research fellow for cloud, data center, and digital transformation services at IDC, and head of the analyst’s women in technology research program. Women, she noted, account for 47 percent of the U.S. workforce and 57 percent of U.S. college graduates, yet just 25 percent of U.S. IT employees and 18 percent of U.S. computer science graduates.

“It’s going to be a little tricky to fix the pipeline because the pipeline right now is not huge,” Bailey observed.

Women already in the pipeline, speakers at the session emphasized, must push hard on their own behalf to get ahead in a male-dominated industry that has scarcely begun to make cultivating women leaders a priority. Mastantuono, among others, encouraged women to set ambitious goals anyway.

“Don’t be afraid to challenge yourself, move out of your comfort zone, and take risks,” she said.

Multiple panelists stressed the importance of networking in particular, noting that for women especially, breaking into IT takes help from people already in the industry.

“Your network is your net worth,” said Bova.

Mastantuono urged women to make time for networking regardless of how busy they are elsewhere. “It is 100 percent part of your job,” she said. “It’s not the extra piece.”

Networking, speakers added, is the most reliable way to find mentors in the IT workforce willing to provide advice based on prior experience. According to Beaton, however, women trying to get ahead in IT or any other industry need advocates as well as mentors. While mentors provide valuable advice, she explained, advocates take concrete, vocal action on your behalf.

“When I think about big leaps I’ve made, it’s because powerful people have stuck their neck out and helped me do it,” Beaton said.

Advocacy, Beaton and others stressed, must be earned rather than requested. Asking someone to advance your career rarely pays off, but inspiring support by pitching in on strategic projects, taking on stretch assignments, and cultivating a profile as a problem solver can turn managers and co-workers into admirers.

“It’s a dance,” Jensen suggested, in which you give and then take in equal measure.

ChannelPro 5 Minute Roundup for the Week of June 7th, 2021
What Can Businesses Do to Fill the Cybersecurity Talent Shortage?
How to Study for CompTIA Cloud+
END_OF_DOCUMENT_TOKEN_TO_BE_REPLACED

Jabra PanaCast Review - Get Your Huddle On
END_OF_DOCUMENT_TOKEN_TO_BE_REPLACED