TD SYNNEX Sees Cause for Caution and Hope in 2023 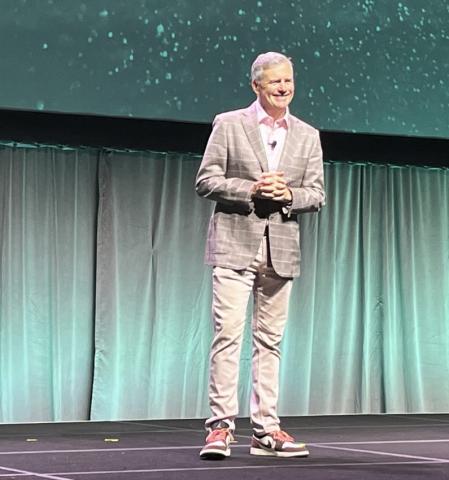 Conditions are strong now and should remain so for at least the next few months, said CEO Rich Hume (pictured) at the company’s CommunitySolv event today. What happens after that is unclear, but likely to be transitory for those who think long term. By Rich Freeman
Tweet

TD SYNNEX has gotten out of the business of predicting the future.

Earlier in the year, company executives echoed projections by many others in IT that the supply chain slowdowns plaguing the channel since 2020 would likely start to ease toward the end of this year.

“And I can tell you it was all wrong, because the supply chain is not good at all,” said Americas President Michael Urban during a keynote today at TD SYNNEX’s CommunitySolv event in Orlando. Now, Urban noted, people are saying things will improve early next year, or perhaps next summer.

“Let’s see how that goes,” he said cautiously.

Such was the advice CommunitySolv attendees got from TD SYNNEX leaders more generally today: conditions are strong now and likely to remain so for at least the next few months, they said. Whether or not that momentum persists beyond then, however, is anyone’s guess.

“What I can’t tell you is what’s going to happen, because really no one knows,” said Rich Hume, the distributor’s CEO, during a presentation today. “What I can tell you is it’s good to think about the band of outcomes.”

At one end of that range is more of what we’re experiencing now. “Obviously, 2022 doesn’t have the same growth attributes as what we had seen in ‘21, but when the books are written, it will show that ‘22 was a great year again in the IT industry,” Hume said.

Indeed, the U.S. market has been up every month but one in the last 12 and Canada has seen six straight months of growth, said Peter Larocque, president of North America technology solutions at TD SYNNEX, citing data from IDC.

All that’s really changed of late, Hume noted, are the specific sources of that growth. “We all know the PC ecosystem has slowed a little bit after an unprecedented run through Covid, but the data center and infrastructure categories are quite robust,” he said, much as Ingram Micro told attendees at its latest conference last week. Sales of cybersecurity, Internet of Things, analytics, and cloud-based technologies are strong too, Hume added.

All of that’s likely to remain true in the short term, moreover. Internal reporting on sales trends and inventory levels gives TD SYNNEX “solid visibility” into the next 90 to 120 days, Hume said, “and the market still continues to show great prospects.”

Partners are optimistic as well. “Globally, 80% of you or thereabouts say that 2023 will be a growth year for now,” Hume said.

Still, he continued, there are plenty of reasons to be wary of the future. The world remains mired in what Hume, invoking a term he heard during a presentation recently, called a “perma-crisis.”

Hume declined to forecast precisely what those challenges will mean for the tech industry next year. But he did offer reasons for hope.