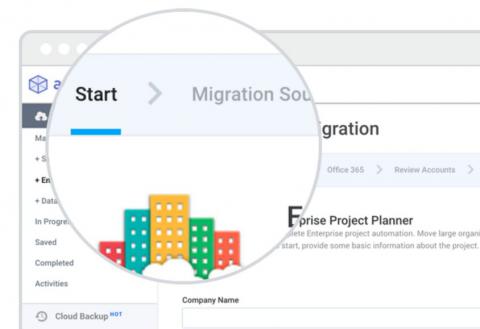 Users now have greater visibility into and control over data migrations, as well as the ability to restore entire OneDrive for Business repositories and purchase backup licensing for OneDrive alone. By Rich Freeman
Tweet

SkyKick Inc. has released a major upgrade to two of the solutions in its cloud management platform.

A new release of the Seattle-based vendor’s Office 365 Migration Software Suite gives users greater visibility into what steps the highly automated system is performing and greater control over those actions.

“We had to basically redesign the entire UX,” says SkyKick co-CEO Todd Schwartz. “Now we’re surfacing a lot more information around what the algorithms are doing, and we’re giving partners the ability to interact with our system.” Users frequently requested both features, he adds.

Also included in the new migration suite release is group management functionality that technicians can use to administer a custom-defined collection of accounts simultaneously.

“It makes it more efficient for the partner to diagnose what’s going on and then take action quickly across a set of users with common issues,” says co-CEO Evan Richman.

The migration suite’s new capabilities come at no extra charge, as pricing for the system remains unchanged.

Enhancements to SkyKick’s Cloud Backup product, which protects data in Office 365 deployments, allow users to restore complete Microsoft OneDrive for Business repositories in addition to specific files and folders. Bulk support for restoring SharePoint site collections and lists is now available in the system as well.

“With a click, you can basically restore an end user’s entire data store around OneDrive or SharePoint,” Schwartz says.

SkyKick has also added a new stand-alone Cloud Backup SKU covering OneDrive for Business exclusively. The new purchasing option, which responds to requests from SkyKick partners, joins previous editions offering combined protection for OneDrive and SharePoint together, solo protection for Office 365 Exchange alone, and comprehensive protection for all three platforms. Partners can now mix and match all four editions for different portions of a user population.

“They can pick specific licenses for specific users and get a lot more fine-tuned on who gets charged for what, which ultimately could lead to lower pricing,” Schwartz says.

SkyKick currently has over 5,000 partners worldwide. Without citing specific figures, the company says that figure is rising steadily.

“We feel very good about the velocity of the adoption,” Richman states.

Today’s launch is the first major upgrade to the SkyKick platform since last June, when the company rolled out new functionality for embedding its migration, backup, and administration software directly within partner websites and new APIs third-party developers can use to build SkyKick functionality into their applications. More recently, the migration and backup systems officially cleared compliance requirements under the federal government's Health Insurance Portability and Accountability Act and EU-U.S. Privacy Shield Framework.

According to Schwartz, who declined to provide details, further enhancements are in the works for the year ahead.

“We’ve got a pretty exciting roadmap in the coming months,” he says.

The Intersection of Hybrid Cloud and Identity
END_OF_DOCUMENT_TOKEN_TO_BE_REPLACED

Jabra PanaCast Review - Get Your Huddle On
END_OF_DOCUMENT_TOKEN_TO_BE_REPLACED