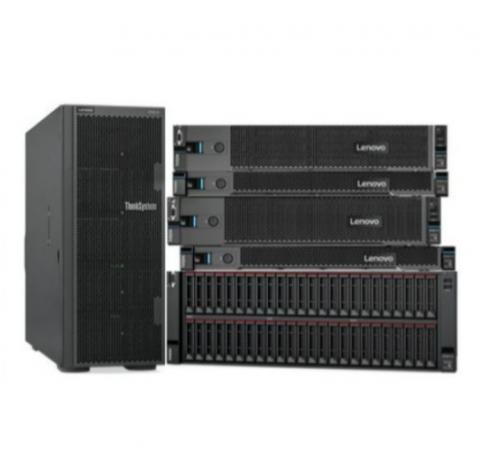 The new Lenovo Infrastructure Solutions V3 portfolio includes over 50 additions to the hardware maker’s ThinkSystem, ThinkAgile, and ThinkEdge families, as well as upgrades to its XClarity management software and ThinkShield security technologies. By Rich Freeman
Tweet

Other hardware releases showcased today include the new TruScale for HPC XtraRack, an addition to the high-performance computing-as-a-service solution Lenovo introduced in January that’s designed to let fast-growing organizations with large capacity requirements pre-install entire racks of devices for immediate use on demand.

“Many HPC customers do not expand capacity by adding a single or two nodes. They expand elastically across multiple racks,” Amini says.

Automation enhancements in XClarity One, according to Amini, enable organizations to onboard new environments up to three times faster, while built-in predictive analytics deliver advance notice of approaching technical issues and drive automatic remediation and service launches.

Updates to Lenovo’s ThinkShield security platform include the introduction of Lenovo System Guard, which expands protection from device tampering available inside Lenovo’s own factories and warehouses previously all the way across third-party supply chains out to end users.

“It basically takes a snapshot of the configuration of the entire platform,” Amini explains. “If anything has been tampered with, from memory to I/O to CPU to adapters, IT will be notified as soon as the customer boots up the system.”

A second ThinkShield enhancement called the Modular Root of Trust is designed to provide further, hardware-based protection from tampering and accelerate recovery from successful attacks by equipping devices with trusted, immutable firmware that users can boot into after a breach.

Today’s launch event coincides with the 30th anniversary of the precise date when IBM shipped its first x86-based server, and the 30th year since the launch of IBM’s ThinkPad line of notebooks. Lenovo acquired IBM’s x86 portfolio in 2014. Together, Lenovo and IBM have shipped more than 24 million servers since 1992.

Kaseya Acquires ConnectBooster
Oct 13: Your RMM Is Your Most Important Security Tool – 5 Tips To Reduce Risk and Grow MRR
END_OF_DOCUMENT_TOKEN_TO_BE_REPLACED