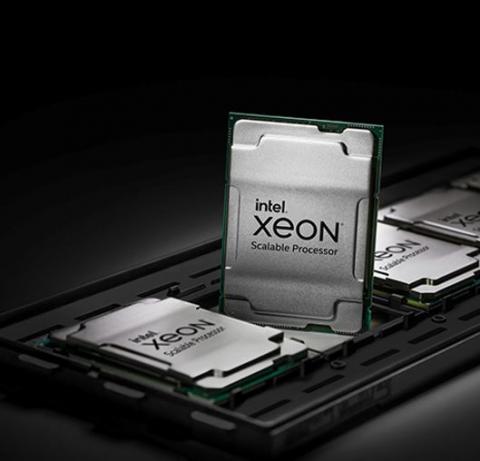 “With our newest Xeon Scalable processors, our ecosystem can create solutions that matter, and our customers can place their workloads securely where they perform the best, from the edge to the network to the cloud,” said Intel CEO Pat Gelsinger this morning in a launch webcast.

Based on Intel’s 10nm process, the 3rd Gen Intel Xeon Scalable family (formerly code-named “Ice Lake”) features 57 SKUs offering a mix of one-, two-, four-, and eight-socket configurations with as many as 40 cores. The platform supports up to 6 TB of memory per socket, up to 8 channels of DDR4-3200 memory per socket, and up to 64 lanes of PCIe Gen4 interface capacity per socket.

Cloud users in particular, according to Intel, can expect to experience up to 50% better performance on database, e-commerce, web server, and other latency-sensitive workloads, as well as 65% better analytics speeds.

The new processors are designed to support bi-directional workload migration between on-premises and online environments as well. “For example, if a customer is using VMware on premise, migrating their virtual machines between the public cloud and their on-prem environment is seamless,” said Lisa Spelman, corporate vice president and general manager of Intel’s Xeon and Memory Group, during this morning’s broadcast.

The new platform’s four network optimized “N-SKUs,” Intel says, deliver up to an average 62% better performance than predecessors on common network and 5G tasks. When combined with Intel Ethernet 800 series adapters and eASIC chips, the manufacturer adds, users can double their 5G MIMO performance within a similar power envelope.

Security features in the new portfolio include Intel’s Total Memory Encryption, Platform Firmware Resilience, and Software Guard Extensions (SGX) technologies. The last of those, which partitions data and application code in isolated memory “enclaves”, was previously available on Intel Xeon E series processors and now ships as well on dual-socket Xeon Scalable processors capable of protecting up to 1 TB of content.