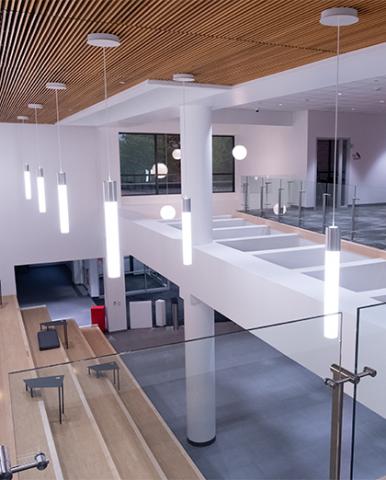 D&H Distributing has moved from its long-time U.S. headquarters in the heart of Harrisburg, Pa., into a new, two-building, 50-acre campus, also in Harrisburg, with more than 240,000 square feet of office space and 77% greater capacity than its former location.

D&H held two events yesterday to commemorate the move and educate its manufacturer partners on its improved capabilities. The company hosted an unveiling and dedication ceremony in the morning, with D&H Co-Presidents Michael Schwab and Dan Schwab welcoming local public officials and press. In the afternoon, D&H introduced its manufacturer partners to the new campus at its "D&H Fest" event, which included an evening of presentations, interactive tours, and celebration activities. Both events featured a keynote presentation from 2019 FIFA Women's World Cup champions Ashlyn Harris and Ali Krieger of the U.S Women's National Soccer Team.

Staying in Harrisburg is evidence of D&H’s commitment to the local community, Dan Schwab told ChannelPro in July. “We could've moved anywhere in the country and we decided that we wanted to stay in the same county, stay in Harrisburg. We're moving six miles away to a new headquarters that will allow us to double in size over time.” 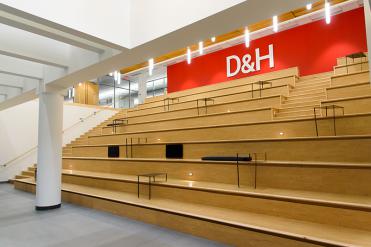 The new headquarters includes a modern, amphitheater-style lobby where D&H employee co-owners can convene and network in a unique and engaging space. Among other features are an Advanced Innovation Center hub located in D&H's main sales area for solution, product, and program trainings; manufacturer offices; and a full multimedia studio that will produce live streaming sessions, webcasts, and additional educational content. Technology showcases will be exhibited on both the SMB and Consumer Technology sales floors, and a state-of-the-art Solutions Architects' Lab will provide hands-on and virtual learning engagements.

“[It’s] a much more intimate, personal experience,” Peter DiMarco, vice president of VAR Sales, told ChannelPro in August. “We sort of took a modern facility and we ‘D&H-ized’ it. We’ve got all the relationship managers on a single floor. Our vendors all have offices.”

The new facility “is going to really allow us to accentuate our strengths,” Dan Schwab said. “It'll allow much more capability for our customers, training, and education, [a] very collaborative-type environment. That just really fits us because as we've grown so quickly [we were] busting at the seams at our current facilities.”

D&H's new offices are located at 100 and 200 Tech Drive in Harrisburg.