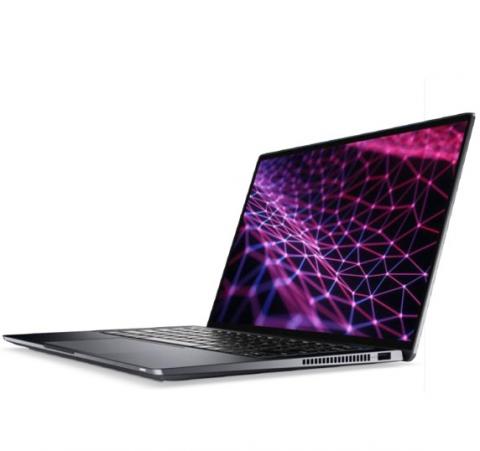 They include what the hardware maker says are the industry’s most powerful 14-inch mobile workstation, the world’s smallest 14-inch 16:10 business PC (pictured), and the first docking station with wireless charging for Qi-enabled smartphones and earbuds. By Rich Freeman
Tweet

Dell Technologies has updated its lineup of commercial laptops and workstations with new and enhanced models optimized for hybrid workers.

Other new products unveiled today include new monitors, a new charging dock, a speakerphone, and a soundbar. All of the new systems, the hardware maker says, reflect ongoing investments in four attributes prized by today’s corporate workforce: collaboration, performance, sustainability, and design.

Included among nine new models in Dell’s Latitude notebook line is the “ultra-premium” Latitude 9430, which the company says is the smallest business PC with a 14-inch 16:10 display. Available either as a laptop or a 2-in-1, and weighing in at as little as 2.8 lbs., the product features a full HD webcam and intelligent audio for clear pictures and sound during online meetings. Buyers can order it in a brand-new color Dell calls graphite.

“It’s a great fit for executives, consultants, and sales makers,” McGowan says. The Latitude 9430 ships next month at starting price of $2,245.

Also due in April and available in both notebook and 2-in-1 form factors is the new Latitude 7330, which features a selection of aluminum and carbon fiber cases, plus a magnesium model that at 2.13 lbs. is the world’s smallest and lightest 13.3-inch premium commercial 16:9 laptop, Dell says.

Despite its portability, McGowan adds, the Latitude 7330 is built for durability as well. “It is super light, but it is sturdy and it is strong.” The device comes with two USB-C, one USB-A, and an HDMI port, and will sell for $1,899 and up.

Five new high-powered mobile workstations introduced today include the Precision 5470. At 3.26 lbs. and up, it’s the smallest and thinnest workstation in the world, according to Dell, as well as the first laptop based on 12th Gen Intel Core H-series processors that’s both verified to meet Intel Evo requirements and based on the Intel vPro platform.

“It will deliver performance levels that previously have not been available in this form factor,” says Mano Gialusis, a senior product marketing manager. “You’ve had to go to a larger mobile workstation.”

The system comes with up to 64GB of DDR5 memory, up to 4TB of storage, and up to NVIDIA RTX A1000 graphics. In benchmark tests, according to Gialusis, it’s delivered about 13 hours of battery life. “Pretty good for something as powerful as that,” he says.

Starting prices for the new device have yet to be announced. It will reach market in April.

Debuting today as well are three new docks, one each for use at home, office, and on the road. According to Dell, the home unit, called the Dell Dual Charge Dock, is the world’s first docking station with a wireless charging stand for Qi-enabled smartphones and earbuds. Set in an upright position that results in a 40% smaller footprint than its predecessor, the device supports dual 4K monitors.