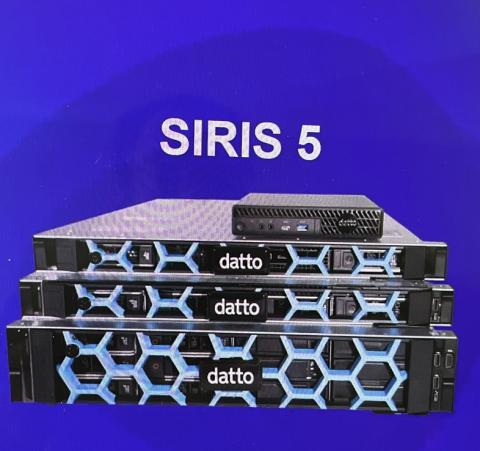 Datto has introduced the next generation of its flagship SIRIS BDR appliances and an updated release of its direct-to-cloud PCs continuity solution.

The new SIRIS 5 series, which is available immediately, contains a number of upgrades designed to improve performance, reliability, and simplicity, according to Director of Product Management Chris Duffy.

“We’ve really dug in here to ensure that we are delivering the best quality we possibly can,” he says.

“In addition, we now have RAID-protected OS drives to reduce single points of failure,” Duffy says.

Enhanced diagnostic capabilities in the new appliances significantly reduce false positives that can produce unnecessary returns, Datto says. The company has adopted a more rigorous burn-in testing period at the factory as well to identify flawed systems before shipping.

To simplify the purchasing process, Datto has reduced the 25 SKUs in the previous SIRIS series to 13. “It was confusing to you to determine what the best fit for your particular end client was,” Duffy says. “With the SIRIS 5, you don’t have to worry about that.”

Buyers can choose among six chassis types, ranging from two mini-PCs to a 1U half-depth form factor with two to four TB of capacity to a 2U system with up to 60 TB of storage. The new products can accommodate larger data volumes as well if needed.

“We’ve designed the SIRIS 5 platform to meet these higher capacity use cases in a more modular fashion,” Duffy says.

Other changes include the introduction of an affordable one-agent minimum on the entry-level SIRIS 5X and a new seven-year data retention period. “This is great to help address auditing standards, especially those for accounting firms that need to maintain records dating back seven years per [the Sarbanes Oxley Act],” Duffy says.

Reporting enhancements include the addition of Microsoft Power BI support, a redesigned device audit report, and a new “hero report.”

“This report allows you to quickly and easily show the value of the BCDR services you’re providing directly to your end clients,” Duffy explains. “It’s ideal for that ad hoc meeting with your client or for your next scheduled QBR, where you can really sit down and review their environment and have that deep conversation.”

“Our bare metal restore is now working five times faster than it was previously,” says Conor Bowler, a senior product manager, adding that bare metal restores are less vulnerable to failure due to Wi-Fi issues and support volume resizing as well.

Unlike previous Cloud Continuity agents, new ones installed from today forward will back up all of a user’s drives instead of just the OS drive, typically the C drive, by default.