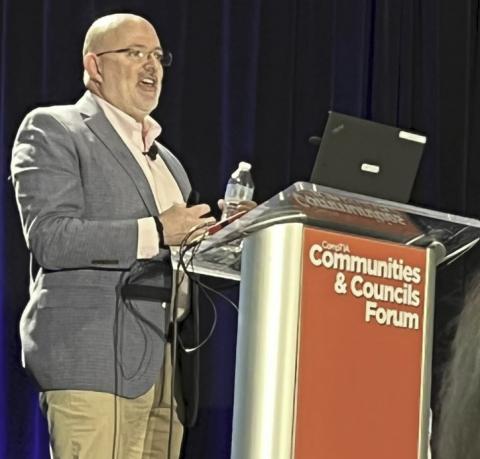 The new policy is aimed at eliminating a barrier that has kept some MSPs from joining the threat intelligence sharing group, according to Chief Community Officer MJ Shoer (pictured), speaking at the association’s Communities and Councils Forum. By Rich Freeman
Tweet

CompTIA is allowing all MSP members to join its cybersecurity information sharing and analysis organization (ISAO) free of charge.

The industry trade association announced the new policy at its 2022 Communities and Councils Forum (CCF), which wrapped up today in Chicago.

“We’re taking away the very small dues barrier that was there and saying, ‘as long as you’re a member of CompTIA and you’re an MSP, you’re a member of the CompTIA ISAO,’” said MJ Shoer, CompTIA’s recently appointed chief community officer, during a CCF keynote yesterday.

Enrollment for ISAO members had previously cost $500, an intentionally modest sum that nevertheless prevented some CompTIA MSPs from participating.

“We’ve got to take that barrier off the table,” said Shoer yesterday in a conversation with ChannelPro, adding that the financial impact of giving away ISAO access will be minimal. “We’re not making a ton of money on the ISAO. It was never intended to be a money maker.”

ISAOs like CompTIA’s are designed to help potential victims of cyberattacks exchange information about threats more easily and respond to them more effectively. The federal government has been actively encouraging businesses across industries to form ISAOs since 2015, due to the increasing prevalence and damaging impact of ransomware and other forms of cybercrime.

Shoer hopes that getting more MSPs involved with the group will deepen its pool of threat intelligence.

“We need to get more of the MSPs sharing what they’re seeing on their own networks and in their customers,” he says. “Let us examine it and make sure it’s something that we’ve already seen and already alerted about. If not, we’ll jump right on it and track it down and get an alert out there and get some mitigation recommendations out there.”

Unveiled early in 2020 and officially launched that summer, the CompTIA ISAO was originally spearheaded by managed services software and service provider ConnectWise in 2019. Shoer, a former MSP and ConnectWise partner, stepped in as the group’s executive director later that year, a few months before CompTIA, a widely respected, vendor-neutral non-profit, assumed ownership of the venture. He remains as big a believer in the organization’s mission as ever.

“Cyber’s not an option,” he says. “If you’re not investing in cybersecurity expertise within your own organization, and you’re not eating your own dog food and doing what you tell your clients they need to be doing, you’re probably not going to be around very much longer.”

Other items high on Shoer’s to-do list for the year ahead include completing the rollout of CompTIA’s new regional community structure, which matches a newly formed community for North American members with existing ones for members in Australia/New Zealand, the “Benelux” countries (Belgium, the Netherlands, and Luxembourg), and the U.K.

Unlike years past, in which a single set of industry advisory councils and topic-related committees in areas like cybersecurity, managed services, and emerging technologies served everyone worldwide, each regional community will now have dedicated councils and committees of their own, based on membership interests. All regions will have a localized version of CompTIA’s Advancing Tech Talent and Diversity Committee, however.