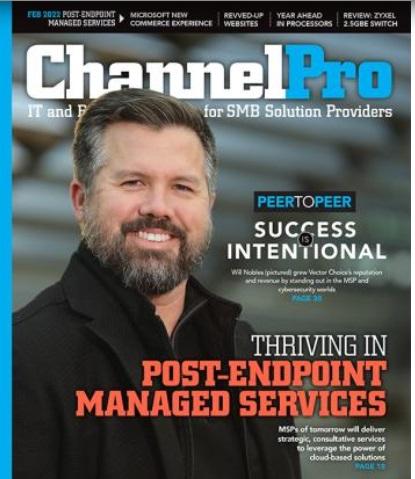 Vector Choice grew its reputation and revenue by intentionally developing a presence and a persona in the MSP and cybersecurity worlds. By Will Nobles
Tweet

AN UPSIDE-DOWN BILLBOARD landed Vector Choice our first client when we opened an office in New Bern, N.C. It wasn’t a mistake that turned out to be fortuitous—it was meant to be an attention grabber. (It wasn’t an original idea; a firm employing this tactic near our headquarters in Atlanta had caught my attention and I decided to try it.)

I wanted to be intentional about standing out as a CEO, as a cybersecurity authority, and as a business. It has been the key to propelling Vector Choice to a $6 million company with offices in seven states.

It took about four years to reach our first million. We didn’t have a marketing program, just a business card, a crappy website, and word of mouth. I leveraged the relationships I had previously made as vice president of technology for a large mortgage company to start getting clients. I also joined Business Network International (BNI) and put myself out there to make connections.

Although we were a million-dollar company, we didn’t have any net profit. In 2014, we rebranded from our original name of Vapor Services (an attempt at a cloud play on words but a poor PR choice due to the rise of the vaping industry) to Vector Choice. In 2015, we joined Robin Robins, launched a marketing program, and hired a marketing assistant.

RECOMMENDED BOOK Traction: Get a Grip on Your Business, Gino Wickman (BenBella Books, 2012)

WHAT PEOPLE WOULD BE SURPRISED TO KNOW ABOUT ME Even though I’m often in the spotlight, I’d rather be at home with my family.

I got involved with CEO peer advisory groups Convene and Vistage, both critical to my growth as a business leader. I also networked at industry conferences and events, which is how I got my first invitation to speak. From there, more invites came. Eventually I landed on Fox 44 TV in Baton Rouge, La., a city that also holds one of our offices. To this day they invite me on air to comment whenever there’s a cybersecurity incident.

Becoming a public speaker and a well-known figure in the MSP community was intentional, like the billboard. I hired a coach to get better at it. I paid to speak at events, I spoke for free, and I marketed the heck out of it. Today I get paid to speak, and I still market the heck out of it. I post on social media when I have an upcoming event, then I post a picture from the event, then I post my experience after the event. It’s also marketed through our newsletter and website. I post and share pictures of myself with celebrities too, not to make myself a celebrity, but to be a standout in IT services and cybersecurity.

There’s no formula for this; you just have to go for it. Take small steps and don’t worry about being perfect or making mistakes.

Here’s two mistakes I learned from:

Today, Vector Choice has a marketing manager, a marketing assistant, and an outsourced company that manages our website and SEO optimization.

ICYMI: Our Channel News Roundup for the Week of January 23rd, 2023
END_OF_DOCUMENT_TOKEN_TO_BE_REPLACED