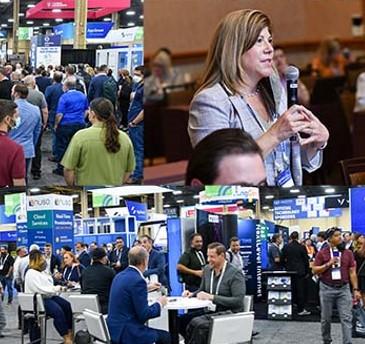 There were more than 320 exhibitors on the show floor at the Channel Partners Conference & Expo last week in Las Vegas, and ChannelPro spoke with a bunch of them. Here are updates from three in particular.

“The traditional program that we had was very focused on UCaaS agent and that type of go-to-market route,” says Patrick McCue, vice president of partner sales at LastPass. “We’re really going to focus on the MSPs, and the resellers, and the technology partners [now], so we’ll be building that from scratch.”

Per plans first disclosed last December, LastPass recently spun off from GoTo as an independent company shortly after the former LogMeIn embraced the new GoTo brand. McCue, who was global vice president of channel sales at GoTo and LastPass before, stayed with LastPass. Michael Day officially replaced him as vice president of partner sales at GoTo earlier this month. Previously a channel executive at RingCentral, Day is no stranger to the SMB channel.

“My whole career has been in the partner world,” he notes.

A “redheaded stepchild” in the past, according to McCue, LastPass was a security vendor attached to a larger company in an entirely distinct field. “It kind of got lost in the shuffle,” he says. “By spinning it off, we can give it its own identity and its own go-to-market within the partner ecosystem.”

McCue pointed to a recent integration pact with Ping Identity as an example of the kind of agreement the company can now more easily pursue. “We want to go out and replicate that across all the different types of partners in cybersecurity,” he says.

LastPass introduced an identity and access management solution specifically for managed service providers called LastPass MSP nine months ago. The partner program McCue has begun designing will be the company’s first with membership tiers and a standardized program of requirements and benefits.

“We do some work on the LastPass side with resellers, but it’s different with each and every partner,” he says.

According to Day, the initial partner response to GoTo’s new brand and simplified portfolio, which features the GoToMeeting conferencing solution, GoToConnect cloud phone system, and a new remote management tool named GoToResolve, has been favorable.

“Patrick did an amazing job building this partner program, and now it’s my opportunity to get the brand out there, to get people to know who is GoTo, what does the product set look like, and how can they take advantage of it in the SMB market.”

SkyAMP Has First Distribution Deal
SkyAMP has signed on the first distributor for its wireless signal amplification technology.

Channel pros can now purchase SkyAMP’s compact appliances, which extend the range of Wi-Fi, Bluetooth, and 4G cellular transmissions by as much as 1,000 feet, through TD SYNNEX.

“It’s going to be that much easier for resellers to come on board,” observes Jason Howell, SkyAMP’s president.

ICYMI: Our Channel News Roundup for the Week of June 20th
END_OF_DOCUMENT_TOKEN_TO_BE_REPLACED