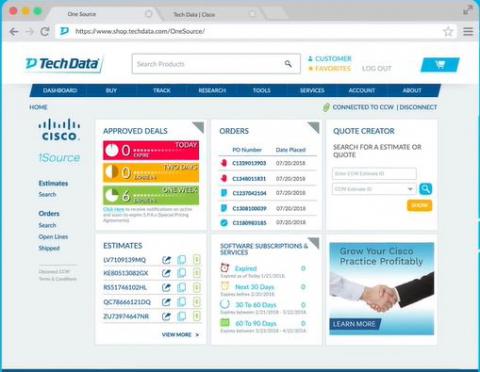 The quote-to-cash platform, which is designed to give smaller resellers access to self-serve tools normally available only to larger Cisco resellers, now includes support for subscription-priced products, new install base management functionality, and more. By Rich Freeman
Tweet

Tech Data has shipped an enhanced version of 1Source, the self-serve online order management tool for Cisco resellers that it first introduced last May.

Equipped with expanded functionality, the new release fully realizes Tech Data’s vision for the tool as an end-to-end resource for processing Cisco-related deals from quoting through to invoicing to contract management in less time and with less manual effort, according to Nicko Roussos, U.S. director of Tech Data’s Cisco Solutions Group.

“What we’ve done is try to automate every juncture, every major milestone, along that workflow,” he says. Roussos spoke with ChannelPro at the 2019 Tech Data Partner Summit event, which is underway now in Chicago.

Significant additions to 1Source include the ability to configure, order, and bill for the growing body of subscription-based solutions Cisco offers. The new functionality is designed to simplify an otherwise complicated task for Tech Data resellers.

“In a recurring billing model, there is a single quote, a single order instance, but there’s multiple invoices per order. That simple fact creates an immense amount of complexity,” Roussos says, noting that larger Cisco partners often have full-time employees who do nothing but manage subscriptions.

Available as well in the updated edition of 1Source is new install base management functionally designed to help partners streamline post-sale processes like renewals. “If you look at Cisco’s service contracts as an example, now you have the ability to view them on a 30-, 60-, 90-day basis, but also go through a quoting motion that previously required you to jump from two or three different portals to get to an end result,” Roussos says. “We’ve essentially displayed the contract detail but also in a couple of clicks, enabled a quote and even placing an order.”

Another new feature introduced this week helps users view comparative inventory and delivery time data when selecting parts, to ensure they can meet their customer’s installation deadlines. “That allows them just to make an informed decision,” Roussos says.

Most of 1Source’s functionality has been available to bigger Cisco partners through the vendor’s own order management tool, which is called Cisco Commerce Workspace (CCW). While smaller resellers could manage deal registration and system configuration through CCW, they had to call or email a sales rep to place orders and monitor their status. 1Source essentially democratizes those capabilities, making them available to channel pros of all sizes.

“It’s become a very big differentiator for us,” says Roussos of the platform, adding that some 2,700 Tech Data partners use the system at present. Roussos expects all of the Cisco partners his team supports to be on 1Source by the end of the year.

Roussos gives the growing openness of Cisco’s ordering infrastructure much of the credit for the increased automation in 1Source. “Cisco’s done a good job of releasing new APIs,” he says. Within the next six months, he continues, those APIs will enable 1Source users to place orders that no one at Tech Data ever needs to touch.

Jabra PanaCast Review - Get Your Huddle On
END_OF_DOCUMENT_TOKEN_TO_BE_REPLACED