LOGICnow (Briefly) Addresses the Elephant in the Room at Seattle Conference 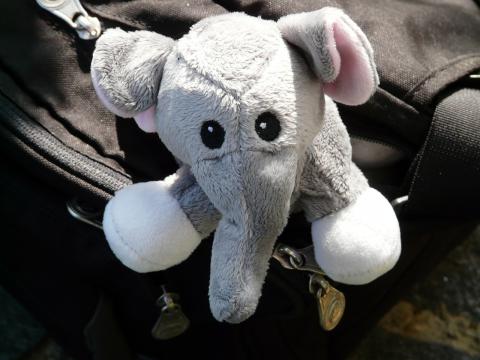 Opportunities in Mac administration, security, and machine learning greatly outweighed the company’s acquisition by SolarWinds as a discussion topic at the event, however. By Rich Freeman
Tweet

Mac management, security, and machine learning were the themes Dundee, Scotland-based LOGICnow wanted to talk about during the MAX on the Move partner conference it held in Seattle last week, but attendees at that show were bound to have another topic on their minds too. So when community manager Nadia Karatsoreos, who served as LOGICnow’s host for the two-day event, took the stage on Friday she had a stuffed toy elephant in her hands.

“Let’s address the elephant in the room,” she said.

That, of course, would be LOGICnow’s recent acquisition by SolarWinds Worldwide LLC, of Austin, Texas, a transaction that according to Karatsoreos would only make LOGICnow solutions even stronger than before.

“Let’s continue to be successful together,” she said, before quickly moving on to other subjects.

In a subsequent interview with ChannelPro, LOGICnow vice president of backup and disaster recovery Chris Groot shared additional thoughts on the SolarWinds acquisition. Though LOGICnow partners naturally have concerns, he said, the newly formed SolarWinds MSP has no intention of making potentially disruptive changes to LOGICnow’s popular solution portfolio.

“It’s steady as she goes,” he said. “We’re just getting access to a lot more resources that are just going to fuel that fire to do more.”

Perhaps unsurprisingly, Groot also said that other managed service software vendors have been placing calls to LOGICnow partners aimed at convincing them to jump ship.

“We’ve definitely heard some of that,” Groot stated. “Competition will do its best to insert fear.”

Speakers at the LOGICnow show mostly focused on opportunities, like managing Apple end points, rather than fears. As both Groot and Karatsoreos noted, businesses are using Macs in rising numbers at present. Keeping those devices patched and functional is every bit as important for MSPs as administering Windows clients.

“It’s no longer just an option,” Karatsoreos said of Mac management. “If you’re not doing it one of your competitors will.”

Support for Apple’s Mac platform has been a focus area this year for LOGICnow, which acquired Mac specialist Mac-MSP LLC in January and added a software agent for devices running Apple’s OS X operating system to its MAX Remote Management RMM solution in April.

Security received plenty of attention at last week’s event too, with several speakers referencing the MAX Risk Intelligence vulnerability scanning and assessment solution LOGICnow rolled out in February. Ransomware in particular, they added, is nearing epidemic proportions, obliging MSPs to put strategies in place for protecting their customers.

“If something goes wrong, and it’s ransomware, they’re going to expect you to fix it,” Groot told ChannelPro-SMB.

Separately, LOGICnow security lead Ian Trump pointed to threats like ransomware as a concrete example of how the SolarWinds acquisition will benefit LOGICnow partners.

“I’m really excited about their [security information and event management] solution," he said of SolarWinds. “I think this is the one hole in our product suite right now.”

By contrast, LOGICnow views machine learning technology as a strength of that suite. The company introduced its LOGICcards machine learning tool, which draws on anonymous data from the 250,000 networks and two million end points LOGICnow partners manage to provide advance warning of potential device failures and security risks, last September, and still has the field largely to itself some nine months later. That’s because developing machine learning software is “incredibly difficult,” Groot told ChannelPro-SMB.

“It’s not a feature you build in six weeks,” he said. Indeed, developing LOGICcards required three years of effort.

Also on the agenda at LOGICnow’s Seattle event was a presentation by Ryan Morris, principal consultant at Gig Harbor, Wash.-based managed services advisory firm Morris Management Partners. At present, he said, less than 25 percent of North American businesses with fewer than 250 employees utilize at least one managed service, and a mere 7 percent pay an MSP to handle all of their IT needs.

“We’ve been doing this for a while now,” Morris observed of managed services, “and all-in we’ve got 7 percent of our primary target audience paying us for this opportunity.”

The reason for that poor market penetration is that most MSPs are strong on IT automation and weak on operational matters like sales and marketing, he continued, adding that MSPs looking to grow their practice—or simply survive mounting competition from providers of telecommunications and print services—must make rectifying those shortfalls a priority.

“We are no longer in a world where being the best technician is sufficient,” Morris said.

Last week’s conference is the latest in a series of smaller events LOGICnow has been doing this year in lieu of the larger shows favored by most of its competitors. The decision to go with regional events came in response to input from MSP business owners who wanted to bring technicians with them to LOGICnow’s training sessions but were leery of investing large sums in travel and lost billable hours.

“We thought if we made it a little bit more geographically friendly for a lot of people it would expand the reach, and we certainly see that,” Groot says. “The response has been really strong on that.”

LOGICnow will hold another MAX on the Move event in Tampa, Fla., this week, and has additional shows planned in 2016 for Rotterdam and the Gold Coast region of Australia.

ConnectWise Warns MSPs: Get Serious About Security Soon or Else
10 Things to Explore at ChannelCon Online 2021

For Tech Data, Dedication to Diversity Starts at the Top
New Microsoft Defender for Enpoint public blog
Identity as a Service for Public Safety: Draft NISTIR 8335 Available for Comment
END_OF_DOCUMENT_TOKEN_TO_BE_REPLACED

Jabra PanaCast Review - Get Your Huddle On
END_OF_DOCUMENT_TOKEN_TO_BE_REPLACED