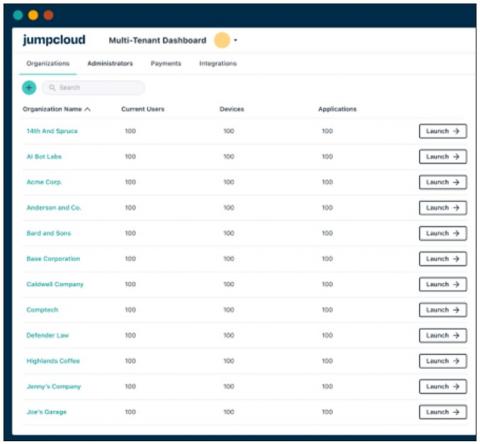 The JumpCloud Multi-Tenant Portal, which is included in a new version of the vendor’s core platform specifically tailored to MSP workflows, is available now. JumpCloud Password Manager is available as well through an early access program. By Rich Freeman
Tweet

JumpCloud has introduced a new version of its security and administration platform for managed service providers equipped with the company’s first MSP-specific administration console.

The two products, named JumpCloud for MSPs and the JumpCloud Multi-Tenant Portal (MTP), are both generally available as of today. They shipped on the same day as an early access release of the company’s first password management solution.

Unlike the original JumpCloud management interface, which includes some multi-tenant features but is tailored to the needs of corporate IT departments, the new MTP is specifically designed to streamline managed service workflows, including onboarding or offboarding users, setting group policies, and invoicing.

“Centralized billing capabilities are something that our customer base has been asking about for a long time,” says Cate Lochead, JumpCloud’s chief marketing officer.

Pricing for the system is charged on a per month, per end user basis at rates available upon request from JumpCloud’s sales team.

JumpCloud Password Manager, which is expected to reach general availability in the fourth quarter of the year, is based on technology JumpCloud acquired in February along with password management vendor MYKI. Like that company’s core solution, the new JumpCloud product features a hybrid architecture combining cloud management with local, device-based credential databases that the company sees as less vulnerable than consolidated repositories.

“Being able to keep the passwords on the device provides an added layer of security,” Lochead says.

Subscriptions to the new service start at $3 per user a month.

JumpCloud Password Manager, which integrates with the new multi-tenant portal and the rest of the JumpCloud portfolio, adds further capabilities to a multi-component platform that already supports MFA, single sign-on, patch management, and a cloud-based RADIUS tool for managing access to VPN and Wi-Fi networks. According to Lochead, procuring all of those systems from a single supplier with unified management helps MSPs increase productivity by reducing the number of partners, endpoint agents, and administration consoles they must juggle.

“I don’t know that everybody uses just Windows,” she says. “There are MacBooks, there’s Linux.”

Managing all of those endpoints, along with the online and onsite solutions they connect to, imposes painful management burdens on overworked technicians, especially in the “work from anywhere” era. Indeed, nearly 60% of respondents to a JumpCloud research study published earlier this year declared themselves overwhelmed by managing remote workers. According to Lochead, JumpCloud’s increasingly comprehensive platform offers relief from that complexity.

“We’re just trying to make it easier to get a handle on everything they have and give them a single pane of glass to manage their day from so they’re having to flip between as few tools as possible,” she says.