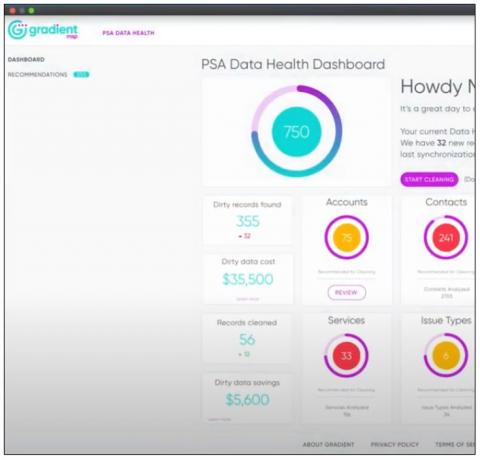 Provided free of charge, the new product will eventually serve as the cornerstone of a larger data intelligence platform that MSPs can use to make smarter, more informed choices about their business, according to Colin Knox, CEO of Gradient MSP as well as a former managed service provider.

“We very much recognize that when we ran our MSP, one of the big differentiators and contributors to our growth wasn’t how hard we worked. It was how we leveraged data to make better decisions in our business,” he says.

Knox is familiar to many channel pros as the founder and former CEO of Passportal, the password security and documentation vendor purchased by SolarWinds MSP in 2019. Following that deal, Knox served SolarWinds MSP, now called N-able, as vice president of community. He left the company last September and founded Gradient MSP the next month.

The startup’s first offering searches PSA records saved within the last two years for “dirty data,” such as customers no longer under contract or contacts no longer employed by a customer. According to Knox, most managed service providers badly need assistance with that task.

“What we’ve recognized as we’ve spoken to more MSPs is that the trust in the data in their PSA is waning because they know that there’s been this accumulation of garbage,” he says.

At present, the solution integrates with ConnectWise Manage, Datto’s Autotask PSA, Kaseya BMS, Syncro, and Tigerpaw. Support for additional platforms will arrive in the months ahead. “We’ll be eventually working to support every PSA in the MSP market,” Knox says.

Gradient has no plans at present to cleanse data in documentation systems like IT Glue, he adds, but would consider adding such functionality if enough users request it. “We’re big on delivering what the market asks for.”

The company also has no plans to begin charging for its initial module. “In the future, as we unveil other modules to clean up and automate other administrative burdens in an MSP business, that’s where we can start to generate revenue,” Knox says.

Providing the software for free also encourages more MSPs to use the system. That, in turn, will help Gradient collect the deep pool of anonymous reporting data it needs to realize its ultimate mission, which is enhancing MSP decision-making.

“Any level of success is achieved by just making the right or the best decisions,” Knox notes. Unlike data visualization systems such as ConnectWise’s BrightGauge product, he adds, Gradient’s solution will not only help users measure their performance but proactively suggest steps they can take to follow in the footsteps of growing peers and avoid mistakes made by struggling ones.

LG Gram for Business 17 (2020): Big Reasons to Like It
END_OF_DOCUMENT_TOKEN_TO_BE_REPLACED