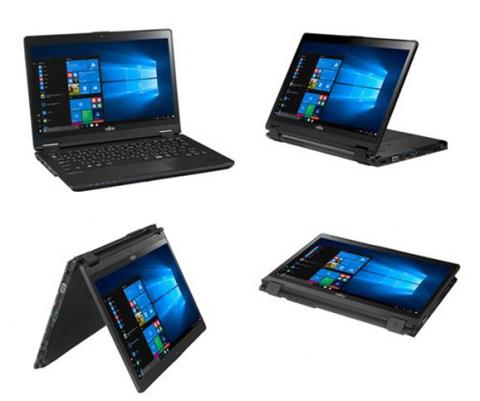 The new multi-mode LIFEBOOK devices and STYLISTIC tablets adapt to a range of different working styles. By ChannelPro
Tweet

The new Fujitsu LIFEBOOK P727 is a 360-degree foldable 2-in-1 device with a 12.5-inch screen. It can be used in four different working modes – classic clamshell, desktop, tablet, and tent – and supports multiple forms of input, including touchscreen, digitizer pen, and keyboard. With a 360-degree hinge, the keyboard can be folded over so that it sits flush behind the screen. The LIFEBOOK P727 also offers optional 4G/LTE connectivity and up to 10 hours of battery life.

The new LIFEBOOK T937 is Fujitsu's latest convertible tablet where the screen can rotate 360-degrees from a central pivot point. Its thin and flexible design allows users to switch from 13.3-inch Ultrabook to tablet mode, enabling work both in the office and on the move. The T937 comes equipped with a bridge battery that allows users to swap out the main battery without having to power down first.

A third new model, the new 13.3-inch STYLISTIC Q737 tablet, is the next generation of the Fujitsu STYLISTIC Q Series 2-in-1 devices, a tablet PC with a detachable keyboard docking station. Combining a full-productivity notebook with the convenience of a tablet, the device offers new levels of performance and functionality.

All three 2-in-1 tablets include the latest generation of Intel processors (7th generation Intel Core i7 vPro processor family), boasting more performance and better battery runtime. They are backed up by enterprise-grade security, including touch-free PalmSecure authentication technology.

"As today's workforce becomes more mobile across many industries, the tools workers use must be more portable and powerful than ever. Not only does the 2-in-1 form factor enable usage in a wide range of scenarios, the new devices are also rich enough in features and functionality to replace traditional notebooks in many cases," says Kevin Wrenn, senior vice president, PC Business at Fujitsu America Inc.

The LIFEBOOK P727 and the STYLISTIC Q737 will be available to order in February 2017 and the LIFEBOOK T937 in March. For more information, visit http://www.fujitsu.com.

Jabra PanaCast Review - Get Your Huddle On
END_OF_DOCUMENT_TOKEN_TO_BE_REPLACED