CompTIA Highlights Work to be Done Getting Women into Technology 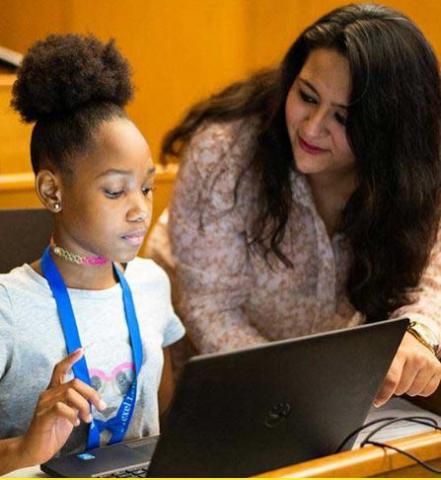 Speakers at a virtual meeting of the membership organization’s Advancing Women in Technology interest group discussed the reasons so few women hold tech jobs at present, and the keys to correcting that imbalance. By Rich Freeman
Tweet

In 2017, just 36% of technology-related jobs in the U.S. were held by women, according to the federal government’s Equal Employment Opportunity Commission. Four years later, frustratingly little has changed, according to Carolyn April, senior director of industry analysis at IT membership organization CompTIA.

“We haven’t seen a ton of progress in the tech industry in particular,” said April yesterday at an online town hall meeting of CompTIA’s Advancing Women in Technology interest group. The relatively few women currently in high technology, she added, aren’t climbing the corporate ladder as fast as male peers either.

“There’s a definitely a ceiling within a lot of tech jobs, and you’re not seeing a lot of representation at the higher levels of management,” April said. The coronavirus pandemic, moreover, has only exacerbated the problem.

“COVID-19 has disproportionately impacted women,” April observed. “Women who are parents tend to be the ones that will have to stay home with the kids and help do the virtual schooling and everything else that’s going on.”

Indeed, 40% of mothers in and outside technology spend at least three hours more per day on household responsibilities now than they did before the pandemic, according to McKinsey, and mothers are twice as likely as fathers to worry about caregiving duties weakening perceptions of their performance.

As a result of all that, noted Kathleen Martin, senior manager of technology interest groups at CompTIA, women are also leaving the tech workforce in greater numbers than men.

“They just get frustrated,” she said. “They can’t bring their whole self to work, so the answer is, ‘I can’t leave my family, so I’m going to have to leave my job.’” According to McKinsey, in fact, one third of working women (and 75% of working Black women) are thinking of giving up or downshifting their career.

Departures from the workforce aren’t the only source of high tech’s gender imbalance, though. A shortage of women pursuing technology roles in the first place is a big issue too, according to town hall panelist Tracey Welson-Rossman, who holds recruiting responsibilities in her role as chief marketing officer at Philadelphia-based IT consultancy Chariot Solutions.

“I’m not seeing women come through our pipeline,” she said.

The problem begins around junior high school, April noted, when girls once as intrigued by robots and computers as boys get turned off by gender stereotypes and an increasingly male-dominated atmosphere in technology classes and clubs.

“They have an interest until they hit maybe puberty, and then the next thing you know they’re dropping off and not interested anymore,” she said. Panelist Noelle Johnson of NextGenT, which helps veterans and others pursue networking and cybersecurity careers, experienced the phenomenon personally.

“It was all very male driven,” she recalls of computer and robotics courses at her middle school. “It just felt like there wasn’t going to be a place for us.”

The problem is only compounded for young people of color in inner cities, added Yvette Steele, director of member communities at CompTIA. “We don’t have access to computer resources and technology resources to become digital natives and add value.”

ChannelPro 5 Minute Roundup for the Week of May 23rd, 2022
END_OF_DOCUMENT_TOKEN_TO_BE_REPLACED