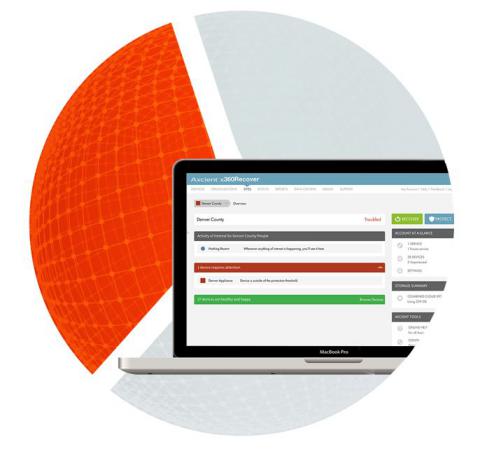 Axcient has combined its three BDR products together into a single solution called x360Recover.

x360Recover brings Axcient’s previously stand-alone Replibit, BRC, and Fusion solutions together into a single BDR service designed to be greater than the sum of its parts.

“This is just not gluing things together,” says Kevin Hoffman, Axcient’s CTO. “It’s an actual new thing that doesn’t leave anyone behind but brings the best of those three previous products into one new product.”

With the launch of x360Recover, Replibit, BRC, and Fusion are no longer available as separate offerings. When existing users of those systems log in, they will find all of the functionality they utilized before plus additional features not previously available to them, according to Axcient CEO David Bennett.

“Whatever you had, you keep,” he says. “You’re also getting access to all of the other things across all of the technologies.” Users pay the same subscription fee they were charged for x360Recover’s constituent products previously, he continues, so those added capabilities come at no extra cost.

The new solution also replaces separate, application-specific administration interfaces with a new, fully-integrated console. “They’re all managed in one place using consistent policies for SLA-based alerting and reporting and health and so forth,” Hoffman says. MSPs who use multiple BDR systems to meet varying client needs, he adds, crave the operational efficiency that a unified platform with a standardized management plane makes possible.

“What we’ve heard from partners is that they want something that’s easy to manage, low labor, inexpensive so they can deploy it to all of their clients, and [that] covers all of their use cases,” Hoffman says.

Combining Replibit, BRC, and Fusion in a single package, Axcient argues, allows users to enjoy those products’ complementary strengths. For example, BRC’s “virtual office” feature, which lets organizations mirror disk images both on a local appliance and in the cloud, shortens recovery time objectives to less than an hour, the vendor says, while Replibit’s “chain-free” snapshot technique shrinks recovery point objectives to as little as 15 minutes.

“No snapshot is dependent on any other snapshot,” says Angus Robertson, Axcient’s Chief Revenue Officer. “It’s fully independent, fully bootable, fully recoverable, so if you have any bad data, you can just delete that data and sync the delta as opposed to [performing] a whole other backup.”

According to Hoffman, combining the three BDR solutions into one compensates for their individual weaknesses as well. Replibit, for example, is a relatively trouble-free system to use, he says. “But the cloud recovery experience has been difficult for people.” BRC, on the other hand, is the exact opposite. “You’ve got slower backups, but then you’ve got a really nice, easy recovery cloud experience,” Hoffman notes. x360, he continues, is designed to retain Replibit’s manageability and combine it with BRC’s cloud recovery capabilities.