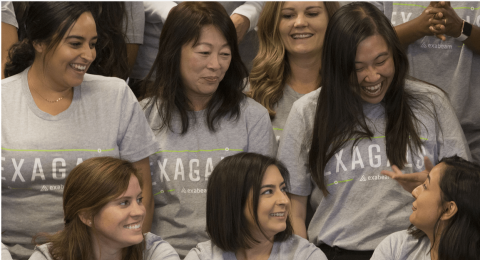 A conversation with the security company’s channel team highlights programs, initiatives, and hiring practices that have moved the needle on diversity. By Colleen Frye
Tweet

After 20 years in the security field, Yumi Nishiyama has gotten used to being the only female among her hoodie-wearing male counterparts. So her decision to join security firm Exabeam nearly three years ago as director of global services was based chiefly on the quality of the people and environment of innovation. On top of that though, she notes, a commitment to diversity, driven by Exabeam co-founder and CEO Nir Polak and supported by company executives, “makes me really happy to be here.”

One of those executives is her boss Ted Plumis, vice president of channels. “Once we started growing a team out beyond a couple of people, we really wanted to have a diverse group of people to look for in the pool,” says Plumis, adding that he wanted candidates characterized by “difference of thought, difference of opinion, difference of life experience.” He notes that the channel team has reached near 50% gender diversity. “At first we just naturally gravitated toward the best people and they just happened to be women, but a lot of it is because Exabeam focuses on putting them in the pool of candidates to start.”

Plumis acknowledges that intentionally expanding where you recruit to widen the talent pool is a learned experience. “I'm one of the people that used to be guilty of just going back to their same network all the time to get the same pool of people. Then we went outside of my network to make the hire and I was like, ‘wow, this is a really good person we brought on.’ And then we actually went to their network to find the next person.”

For Kristin Willard, channel manager, West, Exabeam’s leadership and product were what initially attracted her intererst when interviewing for the job. But, she adds, “through the interview process, finding out about their commitment to diversity was a big driving factor for my decision to actually make the move.”

Company-wide, 39% of Exabeam employees are Black, indigenous, or people of color, Plumis says, and women represent 15% of the workforce at the director level and above.

Exabeam is actively working to improve those percentages with efforts such as the CommUNITY Council, a task force dedicated to promoting diversity and inclusion within Exabeam and the community at large and led by LaChristian Taylor, executive assistant to the CEO, CFO, and president.

“Our founder and CEO has been absolutely resolute in talking about diversity on every single team call,” Willard says. “His commitment has just been encouraging and inspiring to watch.”

Another internal effort is the ExaGals program, which began as an initiative driven by Polak to select a handful of women to help forge the company culture. Over time, ExaGals has evolved to support and empower the women of Exabeam, as well as women in the technology community at large, with career development, education, and personal growth opportunities.

“Gal,” Nishiyama likes to note, is a unit of acceleration, sometimes called galileo after Galileo Galilei.

Guide to Hiring in Information Technology
May 28th, 2021