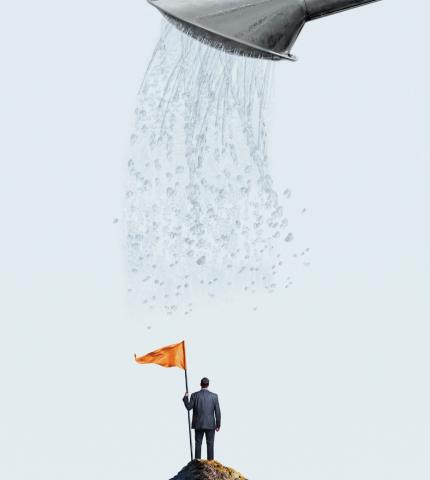 How to develop your A team to take your company to the next level. By Carolyn Heinze
Tweet
Reader ROI:
CHANNEL PROS serious about growth need to transition from solo leader to head of a leadership team once revenue exceeds $1M.
CULTIVATE EMPLOYEES at all levels who have drive and empower them to make decisions, with guidance and support.
PROMOTE FROM WITHIN when possible, but ensure that all leaders have skills like empathy and the ability to gain consensus.

NOT ONLY CAN IT BE LONELY at the top––it can be extremely busy. When channel pros grow beyond $1 million a year and acquire an increasing number of employees, they need a leadership structure that supports the founder. This requires an investment of time (and money) into developing the talent that will take them to the next level.

The first step is letting go. Benjamin Pearce, president and CEO of ACP Technologies, began building his leadership team about five years ago, when it became clear that he could no longer oversee everything. The MSP/MSSP is headquartered in West Seneca, N.Y., with a branch in San Antonio, Texas, has 28 employees, and serves clients across the country.

Currently, ACP’s leadership team includes Pearce, an IT director, an operations manager, a branch manager in Texas, and a comptroller. Only these positions directly report to Pearce, who admits that letting go and allowing others to lead was difficult, but worth it. “When you have the right people and you entrust them––and they know what they’re supposed to do in their role––all of a sudden you’re like, ‘Why didn’t I do that five years ago?’” he says. “But you’ve got to have the structure to be able to do it, and, obviously, the finances to get those people.”

Like Pearce, Michael Hornby didn’t start building his leadership team at Techmentum until it passed the $1 million mark. Last year, the Edison, N.J.-based MSP, which has six employees, made its first acquisition. With that deal came CTO Sue Fuqua. “The breadth of areas that a firm like mine is required to cover is increasing tremendously, and it’s difficult to impossible for a single leader to drive everything that needs to be done forward,” says CEO Hornby.

The next step is hiring a COO, and Hornsby is currently grooming one of his employees for the position. “The person that I’m considering has a similar vision [to mine] for how we want to grow, how we want things to be run, and how we view the need for technology,” he says. In transforming this individual contributor into a leader, Hornby will be gradually adding responsibilities and asking that person to provide increasing input into business decisions.

Developing leadership skills at all levels of the company is a strategy that Peter Melby, CEO of Denver-based Greystone Technology, uses. As head of a $20 million MSP with 120 employees, Melby learned the importance of giving staff autonomy as he built his team. The key is hiring people with what he calls “ownership drive”––professionals who don’t need the boss’s help in making every decision presented to them.

Early on, however, Melby discovered that his version of autonomy was a little too broad. “Giving ultimate freedom and ultimate runway to do whatever you want is not autonomy,” he says. “Autonomy exists when you’ve set the boundaries, and the framework, and the direction for where things go, and then you allow people to have autonomy inside of that space that you’ve provided for them.” Melby calls this “directed autonomy.”