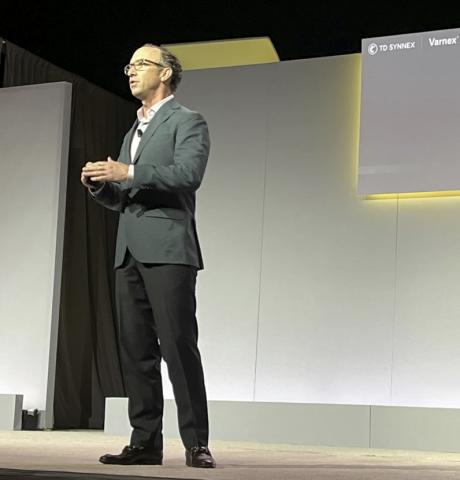 Despite headwinds from supply chain slowdowns and hiring challenges, market conditions are strong for TD SYNNEX and its partners, according to communities leader Sammy Kinlaw (pictured) and other company executives. By Rich Freeman
Tweet

What’s true for ChannelPro readers is apparently true for TD SYNNEX and its partners as well. Just shy of seven months after one-time rivals SYNNEX and Tech Data officially merged to form TD SYNNEX, and some two years after a pandemic brought global economies to a standstill, the mood at the spring 2022 meeting of the distributor’s Varnex partner community in Greenville, S.C., is decidedly optimistic.

“That is a mic drop if I’ve ever seen one,” said Sammy Kinlaw, senior vice president of sales communities for North America at TD SYNNEX, during a keynote this morning.

Expectations for the future among Varnex partners are strong as well, Kinlaw added in a conversation with ChannelPro, noting that he queried seven members of his partner advisory council on the topic during a meeting last weekend.

“I didn’t have anybody in the room out of my seven that did not predict growth this year,” Kinlaw says. “I know, a small sample size, but through my own one-on-ones, through hosting roundtables, through having monthly meetings with my advisory [council], nobody’s come to me and said, ‘I might go out of business,’ or ‘my cashflow is really in jeopardy,’ or ‘I’m losing.’ That is not the mindset.”

For TD SYNNEX itself, at least, that wasn’t the mindset before either. The SMB business Phillips oversees grew revenue north of 20% in both 2020 and 2021, thanks in great measure to spiking sales of laptops, webcams, cloud solutions, and other products suddenly in high demand among home-bound workers.

“Both of them were really good years,” Phillips says.

“In the process, that brings in a conversation about hybrid cloud,” Nethercoat added. “That’s a massive opportunity for all of our partners.”

Kinlaw agrees, citing analytics and the Internet of Things as additional near-term opportunities. “We think there’s double-digit growth in those areas,” he says.

Even the endpoint market might have some life left in it, according to Kinlaw, who once led Tech Data’s endpoint solutions business. Though analysts including IDC expect PC sales to slow in 2022 following two unusually strong years, he expects device revenue through Varnex members to continue rising.

“Endpoint, no surprise to anyone, is still recovering from backlogs that we’ve been carrying for a year,” Kinlaw says.