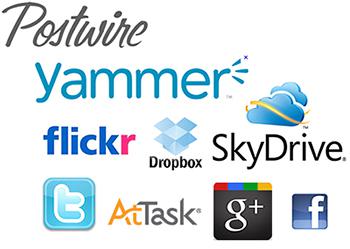 But it hasn’t really worked that well for inter-office communications.

That’s where new platforms like Yammer and Postwire come in.

Sometimes, businesses will refer to Google Docs, Dropbox, or SkyDrive. Again, while these online tools do facilitate collaboration, they’re hardly social platforms. Rather, they are document-sharing solutions.

Some businesses do attempt to use mainstream social media products as their inter-office collaboration forum. Undoubtedly, however, those businesses quickly learn that each mainstream solution has its shortcomings. For example:

NEW PRODUCTS FOR A SOCIAL OFFICE

It’s obvious, then, that no one social media platform has a foothold in the inter-office collaboration market. But that may soon change.

When Microsoft acquired Yammer this past summer for $1.2 billion, it was clear that that Microsoft Corp. was acknowledging two things: 1) there was a need in its portfolio for a better collaboration tool, and 2) there was room in the market for an inter-office, collaborative social media platform.

Yammer “brings the power of social media to your business,” according to its website. It’s essentially a closed-membership version of the Facebook platform (though it does offer more robust document sharing capabilities than Facebook).

Another recent launch adds further fuel to the “social collaboration” fire. From business communications developer VisibleGains comes Postwire, a visually-driven document sharing tool for business groups. VisibleGains launched its Postwire platform at TechCrunch in May of 2012.

If Yammer is the Facebook platform for collaborative office groups, then Postwire is the Pinterest for that same market -- the differentiator, again, being its robust ability to share documents.

According to Phil Terry, CEO of digital consulting firm Creative Good, the development of Google+ cost the search giant roughly $585 million (though he admits this is a “guesstimate”). Yet, at the same time, there remains a perception that the social media site has largely underperformed since its 2011 general launch.

Consider that Microsoft paid more than twice that amount to acquire Yammer, and one thing is clear: all eyes will be on the social collaboration platform market. It will be interesting to see which platforms come out the other side of this social collaboration dust storm.

*Update 11/17/2016: @Task has been rebranded as Workfront. The text and link in the story has been updated accordingly. The thumbnail for this story has not been modified.