“We are kicking off 2020 with a bang, bringing unmatched performance, graphics, and longer battery life to ultrathin and gaming laptop users with the new AMD Ryzen 4000 Series Mobile Processors,” said Saeid Moshkelani, senior vice president and general manager, AMD Client Compute. “We saw historic portfolio growth for AMD Ryzen™ Mobile-powered systems in 2019, and we are already on track to bring wider system adoption of AMD Ryzen 4000 Series Mobile Processors in 2020 from major OEM partners, offering twice the power-efficiency from the previous generation3.”

Featuring up to 8 cores and 16 threads, the AMD Ryzen 4000 U-Series Mobile Processors provide incredible responsiveness and portability, delivering disruptive performance for ultrathin laptops with a configurable 15W TDP6. Additionally, with more than 90 million laptop gamers and creators7, the AMD Ryzen 4000 H-Series Mobile Processors are the new standard for gaming and content creation in innovative, thin and light laptops with a configurable 45W TDP6.

With an unprecedented amount of single-socket compute performance in a desktop platform, the AMD Ryzen Threadripper 3990X will be the definitive solution for digital content creation professionals working with 3D animation, raytraced VFX, and 8K video codecs delivering;

Bringing consumers more choice, the new AMD Athlon3000 Series Mobile Processor family expands the reach of the powerful “Zen” architecture to mainstream notebooks. Athlon 3000 Series enables modern computing experiences such as Windows Hello and Cortana, real performance for day-to-day productivity, and Full HD streaming. Offering up to 86% faster graphics and up to 51% better productivity performance over the competition15,16, systems are slated to be available from global OEMs in early 2020. 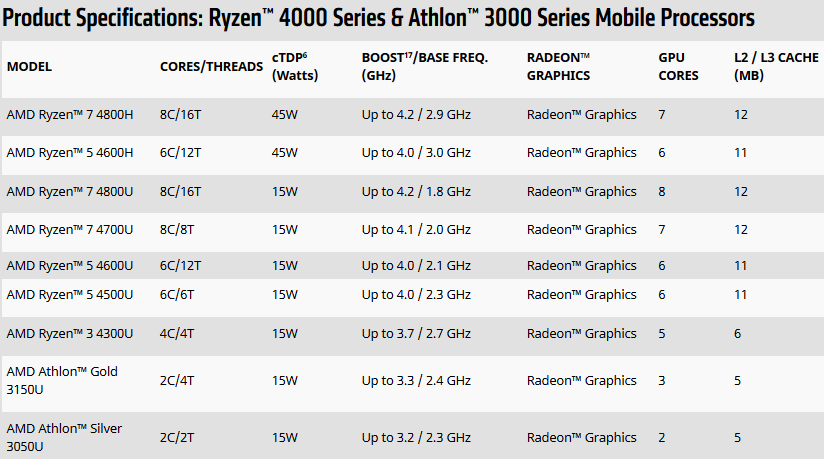 This press release contains forward-looking statements concerning Advanced Micro Devices, Inc. (AMD) including the features, functionality, availability, timing, deployment and expectations of AMD Ryzen™ 4000 Series Mobile Processors, AMD Athlon™ 3000 Series Mobile Processor, and the AMD Ryzen™ Threadripper™ 3990X, which are made pursuant to the Safe Harbor provisions of the Private Securities Litigation Reform Act of 1995. Forward-looking statements are commonly identified by words such as "would," "intends," "believes," "expects," "may," "will," "should," "seeks," "intends," "plans," "pro forma," "estimates," "anticipates," or the negative of these words and phrases, other variations of these words and phrases or comparable terminology. Investors are cautioned that the forward-looking statements in this document are based on current beliefs, assumptions and expectations, speak only as of the date of this document and involve risks and uncertainties that could cause actual results to differ materially from current expectations. Such statements are subject to certain known and unknown risks and uncertainties, many of which are difficult to predict and generally beyond AMD's control, that could cause actual results and other future events to differ materially from those expressed in, or implied or projected by, the forward-looking information and statements. Material factors that could cause actual results to differ materially from current expectations include, without limitation, the following: Intel Corporation’s dominance of the microprocessor market and its aggressive business practices may limit AMD’s ability to compete effectively; AMD relies on third parties to manufacture its products, and if they are unable to do so on a timely basis in sufficient quantities and using competitive technologies, AMD’s business could be materially adversely affected; failure to achieve expected manufacturing yields for AMD’s products could negatively impact its financial results; AMD has a wafer supply agreement with GF with obligations to purchase all of its microprocessor and APU product requirements, and a certain portion of its GPU product requirements, from GLOBALFOUNDRIES Inc. (GF) with limited exceptions. If GF is not able to satisfy AMD’s manufacturing requirements, its business could be adversely impacted; the success of AMD’s business is dependent upon its ability to introduce products on a timely basis with features and performance levels that provide value to its customers while supporting and coinciding with significant industry transitions; if AMD cannot generate sufficient revenue and operating cash flow or obtain external financing, it may face a cash shortfall and be unable to make all of its planned investments in research and development or other strategic investments; the loss of a significant customer may have a material adverse effect on AMD; AMD’s receipt of revenue from its semi-custom SoC products is dependent upon its technology being designed into third-party products and the success of those products; global economic uncertainty may adversely impact AMD’s business and operating results; AMD’s operations are subject to political, legal and economic risks and natural disasters which could have a material adverse effect on AMD; government actions and regulations such as export administration regulations, tariffs and trade protection measures, may limit AMD’s ability to export its products to certain customers; AMD products may be subject to security vulnerabilities that could have a material adverse effect on AMD; IT outages, data loss, data breaches and cyber-attacks could compromise AMD’s intellectual property or other sensitive information, be costly to remediate and cause significant damage to its business and reputation; AMD’s operating results are subject to quarterly and seasonal sales patterns; AMD may not be able to generate sufficient cash to service its debt obligations or meet its working capital requirements; AMD has a large amount of indebtedness which could adversely affect its financial position and prevent it from implementing its strategy or fulfilling its contractual obligations; the agreements governing AMD’s notes and the Secured Revolving Line of Credit impose restrictions on AMD that may adversely affect its ability to operate its business; the markets in which AMD’s products are sold are highly competitive; the conversion of the 2.125% Convertible Senior Notes due 2026 may dilute the ownership interest of its existing stockholders, or may otherwise depress the price of its common stock; uncertainties involving the ordering and shipment of AMD’s products could materially adversely affect it; the demand for AMD’s products depends in part on the market conditions in the industries into which they are sold. Fluctuations in demand for AMD’s products or a market decline in any of these industries could have a material adverse effect on its results of operations; AMD’s ability to design and introduce new products in a timely manner is dependent upon third-party intellectual property; AMD depends on third-party companies for the design, manufacture and supply of motherboards, software and other computer platform components to support its business; if AMD loses Microsoft Corporation’s support for its products or other software vendors do not design and develop software to run on AMD’s products, its ability to sell its products could be materially adversely affected; and AMD’s reliance on third-party distributors and AIB partners subjects it to certain risks.  Investors are urged to review in detail the risks and uncertainties in AMD's Securities and Exchange Commission filings, including but not limited to AMD's Quarterly Report on Form 10-Q for the quarter ended September 28, 2019.

For 50 years AMD has driven innovation in high-performance computing, graphics and visualization technologies ― the building blocks for gaming, immersive platforms and the datacenter. Hundreds of millions of consumers, leading Fortune 500 businesses and cutting-edge scientific research facilities around the world rely on AMD technology daily to improve how they live, work and play. AMD employees around the world are focused on building great products that push the boundaries of what is possible. For more information about how AMD is enabling today and inspiring tomorrow, visit the AMD (NASDAQ:AMD) website, blog, Facebook and Twitter pages.

ChannelPro 5 Minute Roundup for the Week of July 19th, 2021
END_OF_DOCUMENT_TOKEN_TO_BE_REPLACED