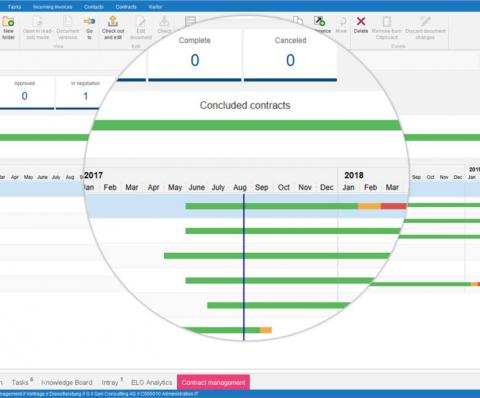 Due in May, the system will feature a streamlined interface and tighter integration with Microsoft Windows. The company announced a special promotion for its contract management solution, available exclusively to SMB Forum attendees, at the show as well. By Rich Freeman
Tweet

ELO Digital Office has a new version of its enterprise content management platform coming that will feature an all-new interface, enhanced server performance, and tighter integration with Microsoft Windows.

Due to reach market in May, ELO ECM Suite 20 was on display in preview form at the ChannelPro SMB Forum event in Dallas yesterday. ELO also introduced a special promotional offer for its contract management solution, available exclusively to attendees of SMB Forum events, at that show.

ECM Suite’s new interface is designed to reduce clutter and leave more room for viewing documents by hiding the usual array of menus in favor of a search box that users can employ to locate information and execute commands. Younger users in particular prefer such simplified design schemes, according to Szilvia Horvath, CEO of ELO Digital Office USA.

“The less clicks the better,” she says.

Server-side performance in version 20 of ECM Suite will be 20% faster than its predecessor on average, according to ELO. New capabilities in the system include enhanced data encryption for greater document security, a health check service that alerts users to technical issues, and improved data replication functionality for organizations that wish to share documents across multiple locations.

Shipped alongside the new server application is an updated desktop client that displays as a sidebar in the Microsoft Window interface, for easier access to documents from within other applications. An enhanced edition of ELO’s integration client, which ELO says will make the solution compatible with virtually any third-party product based on HTML iframes, will ship with the new release too.

Version 20 of ECM Suite marks the introduction of a new naming convention for the product in which the version number will correspond to the year it was released. According to Horvath, users can expect to receive a new edition of the system every year going forward, instead of every two years as in the past.

For the first time, buyers will have the option of paying for ECM Suite via monthly fees versus one-time sums. Available exclusively in the U.S. at present, that billing plan is designed to accommodate rising demand for subscription purchasing that, according to Horvath, is less common in overseas markets.

Subscription pricing is now available for ELO’s contract management solution as well. Under a special promotion available through June, attendees of ChannelPro SMB Forum events can buy three years of usage rights to that system for up to five users for $200 a month. The offer includes setup assistance and a half day of training.

Business solutions have been a product development focus for ELO in recent years. In addition to contract management, the company makes products for invoice management and knowledge management, among others, as well as a system that HR teams can use to coordinate hiring processes.

All of those products are “95% pre-configured” upon installation and require little ongoing maintenance, according to Horvath, making them an appealing way for channel pros to add strategic, and hence sticky, productivity and workflow optimization offerings to their current lineup of hardware, software, and management services.

The Road to Success Is Paved with Service
END_OF_DOCUMENT_TOKEN_TO_BE_REPLACED

Jabra PanaCast Review - Get Your Huddle On
END_OF_DOCUMENT_TOKEN_TO_BE_REPLACED