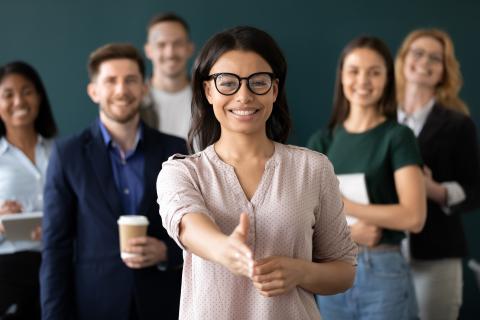 MAKING THE COMMITMENT to build a diverse, equitable, and inclusive workplace is an all-important first step for newcomers to DEI. Building that commitment into every aspect of how a company operates, from the vendors it chooses to the customers it serves and beyond, is the next one. So, is the needle moving in the channel ecosystem?

“I think it's very early days,” says Theresa Caragol, founder and CEO of AchieveUnite, a consulting and education firm that provides channel, partnering, and business acceleration services and recently held an event on leading with trust and inclusivity. “I see the needle beginning to be moved on the vendor side, but I think that we need to keep driving this in a big way.”

Caragol points to a handful of vendors working to increase the number of minority- and women-owned partners such as Comcast, Verizon, and Juniper Networks, which launched its Diversity Plus program this year. Julianne Zuber, Americas Channel Leader at Juniper, explains that 25 socioeconomically diverse existing partners were invited to participate in “phase zero” of the program, which is offering mentoring, training, MDF, and other benefits, and will be expanded over time.

Microsoft is another example. In June 2020, Microsoft announced the Racial Equity Initiative, a five-year commitment to address racial injustice and inequity. The initiative included a commitment to increasing the representation of Black-owned organizations in the U.S. partner community by 20%, driven largely by the Black Partner Growth Initiative (BPGI) launched in October 2020, which provides capital, resources, and training to participants. Exceeding that goal, Microsoft reported in December 2021 that the number of Black and African American-owned business partners in Microsoft's channel increased by 150%.

Phillip Walker, CEO of Network Solutions Provider, an MSP in Manhattan Beach, Calif., is a Microsoft partner and has participated in some BPGI offerings. Two positive outcomes he attributes to the BPGI program are an uptick in traffic to his website and more visibility within Microsoft for NSP’s Azure business. “It's probably one of the first of its kind that [has] actually started to yield results.”

Still, Walker would like to see more progress, and has started his own minority peer group called the Technology Empowerment Alliance (TEMPA), which so far meets informally at industry events. “The goal was to have a safe space to at least have the conversation, because as you know, when you go to an event, we're probably less than 1% of the population,” says Walker, adding that “there's not a huge touchpoint of minority channel chiefs” either.

“The bigger guys, the guys that already have a seat at the table, those guys are already ahead in the race, and are always going to win because the vendors are going to give them more resources,” Walker notes. “So, the idea of this trickle-down effect never works in the channel.”

Dawn Sizer, CEO of 3rd Element Consulting, a certified woman-owned business, doesn’t necessarily want vendors choosing partners just because they are a woman- or minority-owned business. However, she adds, taking steps to make it easier to obtain, say, MDF or other resources, for women- and minority-owned businesses would help them grow. “Once they reach a certain point … then they go back to the equal playing field.”

Similarly, Sizer wants partners and customers to choose her based on what her company brings to the table. “I think it's the larger companies that have this initiative, so they want to diversify their vendors, their suppliers. Do I want to be chosen for just that alone? Absolutely not. I want to be chosen because we are good people, and they want to do business with us. If that also checks a box for them, that's great, but I'd rather have the business part of it be first.”

In terms of choosing a vendor partner, Sizer says, “We choose to do business with good people.” She also considers the organization’s culture and business alignment, “and to some extent, do they look the way that we do, are they diverse? But at the end of the day … I want them to be a good partner first.”