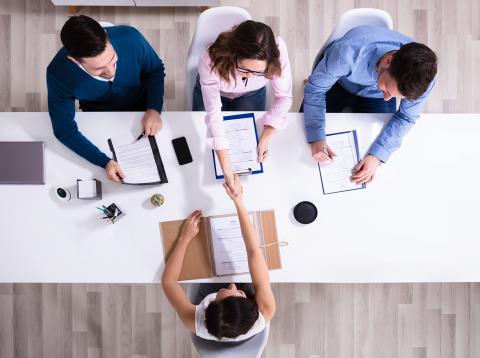 Once you’ve found the perfect acquisition target, negotiated a deal, and signed a contract, here are some tips for ensuring the onboarding process goes smoothly and provides the expected ROI. By Colleen Frye
Tweet
Reader ROI:
ONBOARDING an acquired firm requires a project plan that addresses how personnel, tools, and customers will be organized.
THE BUYER should assign a team to oversee the plan, decide how to communicate it to employees/customers, and track progress.
DESIGN INTEGRATIONS AND CONSOLIDATIONS to minimize staff disruptions and maintain customer service levels.

There's no one playbook for onboarding an acquired company, but those who have done it point out some mistakes to avoid:

Retaining employees—the ones you want, at least—is a key part of the onboarding process.

Taylor Business Group’s Michael France recommends having the seller identify the “star players” prior to closing and nailing down employment contracts with them ahead of time.

For Iconic IT, which is focused on growth, “we need every person we can find,” the firm’s Mike Fowler says. “We've gone into every acquisition with the expectation that we're keeping people and that there's productive roles for everyone.”

Snap Tech’s Karl Bickmore says his firm spends a lot of due diligence focusing on cultural fit, so his intention is to keep every employee as well. “We may redirect some or change the responsibilities … but in the grand scheme of things, we want to keep employees.” He makes an effort to spend time with the acquired employees to build trust. Often, he says, they’re excited about working for a bigger company with more opportunity.

Sometimes there’s not a role for everyone, Aldridge’s Patrick Wiley acknowledges. “We’ve bought a couple of companies that had nearly double the amount of staff the numbers say they should have. Those are trickier situations.” Wiley says Aldridge tries to address downsizing quickly, “provided that we're not impacting client relationships.”

Finally, there are situations when an employee you initially want to retain doesn’t work out, Bickmore says, and that needs to be addressed promptly but respectfully. “You're working with someone’s livelihood. We’ve offered to give them letters of recommendation or refer them to other IT providers.”

Employee issues are sensitive, but it's important to get the team right, France says, to fully benefit from "how great the combination" of these companies can be.

8 Best Practices to Build Equity in Your Business Before You Sell
March 3rd, 2020