Tech at Home: Luxury and Tech off the Grid

By Steven Castle
A 9,000-square-foot home is powered by solar energy and deftly controlled by a Crestron automation system.
Tweet 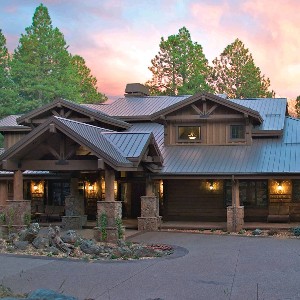 Just how remote is the summer home of Tim Snider in the mountains north of Flagstaff, Ariz.? It takes local police half an hour to get there, and there’s a 6-mile driveway just to get to the front gate. There isn’t a power line in sight—just ponderosa pines and majestic mountains. Talk about getting away from it all.

When building their remote retreat, Tim and his family knew they would have no choice but to power it with alternative energy sources. In addition to a large solar photovoltaic (PV) system, their off-grid survival kit would include solar batteries to store the electricity generated by the solar panels for use at night and on cloudy days, a solar thermal system to heat water for domestic use and the home’s radiant floor heating system, and a backup generator and water heater for times when all the power from the sun isn’t enough.

Even an off-the-grid home deserves to have some entertainment, so Tim met with Andy and Charlie White of AVDomotics in Sedona, Ariz., to discuss how to work audio and video equipment into the plans. The Sniders weren’t going for megawatt home theaters, but there are 12 zones of audio and eight TVs in the house, including a surround-sound system in the family room, served by home control company Crestron’s ADMS Intermedia Delivery System media server. Crestron’s DigitalMedia switching technology delivers audio and video content to different areas of the house via the company’s DigitalMedia fiber solution, with fiber-optic wires terminating at each of the home’s TVs.

In fact, the Crestron AMS-AIP surround-sound processor was going to be the home’s main home control processor—until Tim and AVDomotics talked some more. Tim has a background in engineering and quickly realized he could reap bigger benefits by using a more robust processor from Crestron’s product lineup. A beefier processor would allow the home’s many subsystems to be tied together to achieve better efficiencies—and to enable control of those systems remotely. It was essential that no large power drains would occur in the home during the winter months when it was unoccupied, and the Crestron system could help safeguard against that, too.

So the Crestron AMS-AIP processor stayed in charge of the family room. AVDomotics added Crestron’s more powerful AV2 processor to handle everything else, pairing it with an eMonitor system from Powerhouse Dynamics. The web-based eMonitor interface— available on a computer, Crestron touchpanels, iPads and Tim’s iPhone—shows user-friendly charts and graphs of the home’s production of solar power and how much energy is being consumed. Tim can also see how much power is available as stored energy in the batteries from Crestron’s touchpanels and apps.

The result is a luxury home that showcases the natural beauty of its woods and stone—and is completely self-powered and carefully monitored. The home consumes about 100 kilowatt hours (kWh) of solar energy a day when the homeowners are in residence—some of that just from keeping the backup generators warmed and ready to go—while the 72-panel solar PV array produces 16.6 kw, with 260 kWh of battery storage.

That knife was honed with the programming of AVDomotics’ Charlie White. AVDomotics created its own “modules” within the Crestron platform to enable the automation system to communicate with an OutBack Mate2 solar inverter control system. The company also programmed the Crestron system to monitor the level of liquid propane and water available in their respective tanks. A high-end Uponor in-floor radiant heating system, which relies on water heated by the roof’s solar thermal panels and liquid propane-fueled hot water in the backup tank, was integrated into the Crestron control system as well. All of these systems, plus the security system, lights and A/V gear, can be operated not only from Tim’s smartphone but from three Crestron in-wall TPS-6L and one TPMC-8L touchpanels located throughout the home, in addition to three TPMC handheld remotes and three iPads using a Crestron app.

The Crestron system can also perform much-needed load shedding, in which it turns certain devices down or completely off to save energy. When the house is unoccupied, for example, the well and septic pumps shut off, and if there isn’t much juice left in the solar system’s storage batteries, the lights dim to 75 percent.

“The energy management is the best part of the system. The thing that I use the most is checking on the PV system and seeing how much energy we’re producing, and I can do that from anywhere in the world,” says Tim. “The first year in the house, we were learning all about it, but now my confidence level is high and I don’t worry about the place as much as I used to.”

After construction, the owners realized they could save even more by swapping their incandescent lights for LEDs (light emitting diodes). White says it cost about $3,500 to replace the existing bulbs with Philips and Color Kinetics LEDs, but was well worth it, as the homeowners would have had to spend $10,000 more on solar panels to run the incandescent lights. In essence, they have already received an immediate return on their investment, and then some.

The ceiling fans that help cool the house may be in for an upgrade, too. AVDomotics may tie them to indoor and outdoor temperature sensors so they can turn on and off automatically.

“There’s a lot more we can do,” adds Tim. “I want some applications to only come on when batteries are full and there’s still some sun to produce power. … We’ve gotten our propane consumption down to a low level, but now I want to manage it so I don’t have to consume any carbon fuel there.”

The Far Away Button

When it’s time to leave for the season, the owners only have to push an AWAY button on any of their Crestron controllers turn off everything. Then they can hop in the car, take a last look at their remote retreat, and press another button to roll down the aluminum shutters over all of the first floor windows and doors for safety and security.

For added assurance, the homeowners and AVDomotics receive alerts from the eMonitor and Crestron systems if any circuits are on or if there’s a problem with a system in the home. Emails are also delivered to AVDomotics twice a day with a status report of the system, which helps the custom electronics dealer proactively remedy a situation before it becomes costly or dangerous.

When you’re totally off the grid and producing electricity via a solar array, you had better know how much electricity you’re producing, how much you have stored in batteries, and how much you’re using. That’s where a comprehensive energy monitoring system like the eMonitor from Powerhouse Dynamics comes in handy.

Not only does the eMonitor measure the home’s total electricity usage, it goes deeper by measuring each of 24 selected circuits. It does this with doughnut-shaped current transformers (CTs) that clip around the two main power lines and those coming from each circuit being monitored, then delivers the info via Ethernet cable or Wi-Fi to the home’s network router.

The eMonitor’s web-based interface shows the biggest energy hogs in the house and offers charts and graphs of usage history so homeowners can gauge how much energy certain appliances and devices are consuming at any given time. The custom electronics (CE) pros at AVDomotics in Sedona, Ariz., used a programmed module to allow the eMonitor interface to be displayed on all Crestron system touchpanels, as well as on iPad and mobile apps.

This article was originally published by our content partner EH

See more in Tech at Home: Luxury and Tech off the Grid:

7 Ways Your Boss Is Watching You at Work

Let's spy in on seven options that can provide a peek on employees during the workday.

8 Apps That Can Save Your Life

In case of emergency, you may want to have one of these lifesavers stashed in your pocket.

How to Build or Scale an Integrated Telehealth Platform
END_OF_DOCUMENT_TOKEN_TO_BE_REPLACED