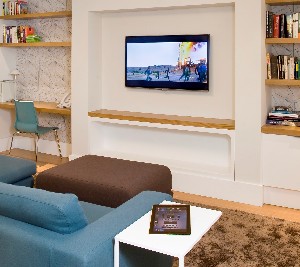 For eight years, the family who lived in this elegant Boston brownstone had dealt with an inconsistent indoor climate, troublesome light switches and poor communication between six floors. Finally, after deciding to update the décor, they turned to the custom electronics (CE) pros at Advanced Communication Technologies (ACT), Rockland, Mass., to integrate modern home automation systems into a home that was in bad need of a technology overhaul.

“Even though the owner had a fair amount of knowledge about technology, he hadn’t really implemented it in his home yet,” says ACT senior project manager Bill Gerber. “It was very minimal as far as infrastructure and products.” After lengthy discussions with Gerber about the high-tech possibilities, though, the homeowners fully embraced the notion of having a home automation system that would afford their family the convenience of being able to operate the lights, security devices and several thermostats, as well as distribute high definition video and music throughout the house—all from their current stash of iPhones, iPads, iPod touches, and Mac computers. The Savant automation system chosen for the project ties everything together; a companion mobile app puts the controls on the family’s mobile devices.

See more in Tech at Home: Boston Brownstone Goes from Barebones to Brimming with Technology:

20 Favorite Apps from the Pros to Help Productivity

Four A/V and IT pros share their recommendations on apps they can't live without on their mobile devices.

The best apps for IT pros. With these mobile apps, you can interact with your network from any location using your Apple iOS or Android mobile device. This collection of apps presents 11 highly rated mobile tools that will accomplish a variety of network tasks. Also included are a few IT toolkits that can accommodate most tasks from connection speed tests to network monitoring. Other apps account for multiple specific network tools from Ping and DNS reports to mobile apps that mimic network and administration and control software.