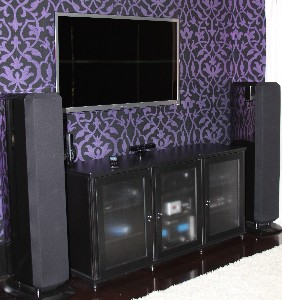 As soon as one electronics product hits the market, you can bet there’s another better, faster, more sophisticated version of it on the drawing board. With an evolutionary path as short as this, it’s difficult to know whether to update now or wait it out a few more months. The owner of this 8,800-square-foot home in Atlanta had inherited a Crestron PAD8 audio distribution system when he moved in. To satisfy his craving for all types of audio, all the time, in key areas of the house, the custom electronics (CE) pros at @Audio Automation & Theater, Atlanta, had tied a remarkable array of components to Crestron PAD8 switchers and amps: Apple TV, three cable boxes, three Sonos Connect units, Blu-Ray Disc player, PlayStation3 and an Xbox 360. “It was a tech geek’s wet dream,” says @Audio Automation & Theaters, Charles Choc.

Like most audiophiles, though, this homeowner was committed to staying on the cutting edge. So when Crestron phased out its PAD8 products, he shifted his upgrade plans into high gear. The PAD8 system had supported 8 zones of audio; the new Sonnex system that Choc recommended would allow him to expand to 14 listening zones and enable the integration of additional audio components, including more Apple TVs, Kaleidescape media server, and a Meridian music streamer. And, because Sonnex combines amplification, switching and digital audio processing in one box, it would take up less space in the home’s equipment rack than the multiple individual boxes that made up the PAD8 did. This will leave room for any other components the homeowner may eventually want to include. On his list: 4K media server, PlayStation4 and Xbox One. The Crestron DigitalMedia switcher that was in place prior to the upgrade supported the distribution of video, but this was also upgraded to support more TVs and more components.

As long as the audio and video systems were being updated, the owner decided to have @Audio Automation & Theater install Crestron’s wireless infiNET lighting system, as well as a few surveillance cameras—and integrate these with the audio and video distribution systems. (The integration of the systems is facilitated by a Crestron CP3 automation processor—another trade up from the home’s existing Crestron PMC3-XP processor.)

Given the huge assortment of audio and video components accessible, and the incorporation of 54 loads of lighting, one of the biggest tech improvements to the home would be the creation of a user interface that would enable the owner to easily manage the new mass of technology. “The owner had previously been using a couple of iPads as his points of control, says Choc. “We added several more iDevices so there’s a total of 10 (5 iPads and 5 iPhones), as well as 11 dedicated handheld remotes and 4 in-wall touchscreens.” This would give the owner the quantity of controls needed to support the larger system; @Audio Automation & Theater had the quality angle covered by customizing a simple, straightforward common user interface accessible via the multiple controls.

On the main control screen of any iPad, for example, the owner select from a list the room(s) in which he’d like to listen to music, followed by the source(s) he’d like to listen to. Also available a layer down in the menu is a list of favorite stations and playlists, as well as controls for equalization and other settings for each audio zone.

At the top of every screen are icons that allow the owner to “jump” to controls for lighting and security (surveillance cameras). “Regardless of what page the homeowner is on, he can quickly control non-A/V systems,” says Choc.

Bigger, more impactful audio might have been the owner’s initial reason for updating the technology in his house, but thanks to the integration capabilities of Crestron products, effortless home control was the end result.

From meditation to yoga to sleep strategies, your smart devices can deliver some "you" time.

The Elephant in the Room: Your 2020 Focus on Business Strategy