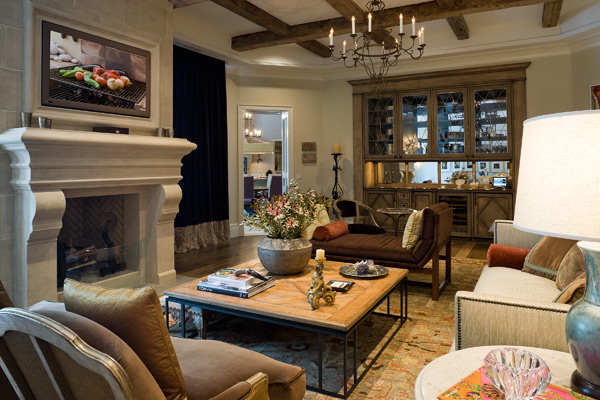 What do you expect to see in the smartest home in the country? A ton of technology, right? The Bowers & Wilkins (B&W) speakers that stream music to every corner of this 14,000-square-foot abode blend in with the ceilings. The sensors that monitor the temperature of each room are painted to match the wall surfaces. The keypads and touchpanels that operate the home’s lights and audio/ video equipment are virtually nonexistent.

A Fusion of Electronics

The disappearing act was completely intentional, says Sean Weiner, president of Starr Systems Design, the Baltimore, Md.–based firm that tricked out this award-winning house. The custom electronics (CE) pros at Starr collaborated with the homeowners and the interior designer throughout the six-year-long project to ensure that every piece of technology would fuse seamlessly into the decor, which would showcase artwork and materials from around the globe. One product largely responsible for clearing away the technological clutter was the Apple iPad.

“Six years ago when we started planning the design of the house, iPads weren’t around,” says the owner. Naturally, at that point, the best option would have been to install several in-wall touchpanels throughout the residence. AMX, the system that was chosen by Weiner to manage the home’s lights, A/V equipment, music distribution system, pool and spa controls, surveillance cameras and motorized window shades, offered a variety of sleek in-wall touchpanels that would have served the purpose well. However, when the iPad arrived, plans changed.

The early-adopter homeowners jumped at the chance to use their iPads to manage their home’s systems. Using AMX’s TPControl app, Starr Systems configured the owners’ six iPads to function just like any of AMX’s home control touchpanels. And Starr Systems left a few of the original AMX touchpanels in places where they felt the owners would benefit from using wall-mounted interfaces (see sidebar).

The iPads have since become the family’s de facto interface for managing and controlling their home. An intuitively designed menu presents the owners the key areas of control, like lighting, air conditioning, music, theater and more. From there they can drill down to specific operations for certain devices.

If music is selected from the main menu, the owner can choose where to have it play among the home’s 30 listening zones. They can then select which source they’d like to listen to, such as the Sirius radio tuner or an iPod stationed on a Sonance iPort dock.

Lighting is operated the same way: Go to the lighting page, choose the room, select a group of lights to control, then touch a button to tell that group specifically what to do. “We craved simplicity like this,” says the homeowner, “Because we knew other people besides our family would need to understand immediately how to use the system.”

A Work In Progress

Make no mistake. The iPad may be a convenient tool for operating a large home—and an effective means of keeping walls clear of keypads and touchpanels—but what makes this house tick is the powerful AMX NI-4100 NetLinx controller. It’s the brain that ties all of the home’s systems together and allows the owners and Starr Systems to easily change, update and add new components as deemed necessary. This ability to adapt was critical to this project, says the owner, as many of the products available today weren’t around when the project started six years ago. “Blu-ray players weren’t around and neither were iPod docks, so the design was constantly evolving,” the homeowner relates.

Even now, after living in the house for a little over a year, the family continues to update the technology. The four Middle Atlantic equipment racks in a dedicated mechanical room in the basement have available space to hold new A/V components, and closets upstairs are wired with HDMI cabling to support additional racks of equipment. “When we initially wired this house in 2008, we weren’t sure that the HDMI cabling would be able to transmit audio/video signals as far as we needed them to go, but since then, HDMI transceivers have gotten better, so the infrastructure works, and works well,” says Weiner.

Basically, everything in this house works really, really well … and looks good doing it. Nearly four dozen B&W speakers were positioned throughout the residence, evenly blanketing every area with music—without being noticed. The interior designer faux painted the grilles of each speaker to blend in perfectly with the unique texture, coloring and pattern of each ceiling surface. Even the dozen outdoor speakers around the patio and pool received the faux treatment. Several James Loudspeaker units were built into the stonework that surrounds the back side of the swimming pool, then painted to match the masonry so they would go undetected.

The owners discovered that there’s yet another effective way to integrate technology into the design of a home. In addition to hiding it or blending it, the technology can be used to complement the decor. Each of the home’s Panasonic, Samsung, and Runco flatpanel TVs were selected for their decorative appeal. For example, the bezel of the 50-inch Runco display in the family room was custom-finished by the manufacturer to match the magnificent stone hearth. The 55-inch Samsung 3D LED TV in the master bedroom—the rest of the Samsung units are 3D as well—was selected for its mirrored bezel, a look that would reflect the room’s modern and airy design. The master suite also received two sets of motorized woven wood blinds. These were customized by Lutron Electronics to hug the shape of the huge floor-to-ceiling windows so that no incoming sunlight would interfere with the image on the TV screen.

A State of Evolution

Today the home boasts 15 flat-panel TVs, chosen specifically by the owner for their ability to produce “vibrant colors and great contrast.” However, as is the case with all other electronic aspects of this house, the owner made arrangements for additional displays. In the loft area that separates the kids’ bedrooms from the guest suites, there’s an open cavity in the wall where a TV should be. All the necessary cabling is there, too. The problem: “My wife and I couldn’t agree on whether to put a TV there,” says the owner. “She wanted one; I didn’t.” It appears as if he finally conceded. The artwork that had been covering the opening has been removed, and she’s ready to hang a flat-panel TV. There’s also a spot for a TV in the in-law’s suite, only in this case the wiring comes up through the floor. “The plan is to put a TV inside a cabinet at the foot of the bed and motorize it so that the TV can lift up on command from a remote,” Weiner explains.

The home’s Lutron HomeWorks lighting control system is also evolving. Starr Systems started by programming the system to allow the family to issue basic commands to groups of light fixtures from lowprofile Lutron keypads mounted near the entrance of each room. For now, the buttons have temporary labels. “The family wanted to ‘live with the system’ before committing to specific settings and engraving,” says Weiner. Currently, the lights in each room are grouped together by fixture type. For example, in the dining room, there is a button that activates the chandelier, another turns on and off the sconces and another button controls the recessed ceiling fixtures.

This design works well for the family now, but the AMX and Lutron systems can be easily tweaked by Starr Systems should they choose to regroup or alter the settings of the lights to suit certain activities like entertaining, reading or relaxing.

Nowhere are changes in technology more apparent than in the world of home theater, and this home’s media room was designed to keep pace with new innovations. Take the theater’s Digital Projection International (DPI) Titan 3D video projector. It wasn’t always in the plan. Initially, Starr Systems had specified a projector that could handle only 2D content. When 3D projectors hit the market, the owners altered the plan immediately, investing in the Titan and plenty of 3D glasses to entertain a crowd.

In addition serving up 3D movies, the DPI Titan projector shows its fair share of video games and sporting events. “One of my 13-year-old son’s favorite pastimes is playing PlayStation 3 games on the big screen,” says the homeowner.

Engaging a Playstation button on the home theater menu on the iPad brightens the lights and activates the gaming console, which is stowed with the rest of the home theater components in an equipment rack in the adjacent mechanical room. The family can also use the iPad to select a movie that’s been stored digitally on the hard drive of a Kaleidescape media server or spin something they’ve rented on a Panasonic Blu-ray player, or stream from an Apple TV device. Because many movies are now filmed in a CinemaScope format, Starr Systems chose a superwide 2:35.1 screen from Da-Lite as the family’s main viewing format; however, they always have the option— by touching a button on the iPad—to view a program in a narrower 1.78:1 format. The command signals motorized fabric masking panels to descend over portions of the screen to alter its shape.

Regardless of the format that’s chosen, the screen is in the right position to hide the three front CT-Series B&W speakers. The screen is microperforated so audio from the speakers flows through unaffected. The remaining four B&W speakers and four subwoofers that make up the 7.1 surround-sound system are tucked behind the fabric ceiling and wall panels, which are removable in case Starr Systems needs to service or replace the equipment in the future.

Speaking of the future, there’s more in store for this cutting-edge theater. First on the list is a Sony Network Media Player. This product will enable the family to stream and store movies from Internet services such as Hulu Plus, Vudu and Pandora— something the homeowner admits he thought was something only computer users did. “I now know streaming has become a serious way to get content,” he says. Thankfully, the Starr Systems crew was thinking ahead when it designed the electronic systems for this award-winning house. With the right cabling in place, easy access to components and a home management system that’s built for expansion, this home is ready for any technology that comes its way.

See more in Tech at Home: All Systems Synchronized in iPad-Controlled Home: