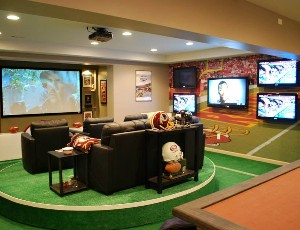 The team of designers on DIY Network's Man Cave show has turned basements into swank nightclubs, storage sheds into laid-back guy spaces and attics into rock-and-roll hideaways. As part of a contest that was co-sponsored by the NFL Network and DIY Network, Maryland homeowners Ryan and Jessica Donaldson were awarded with a rec room conversion themed around their favorite football teams: hers, the Ravens; his, the Redskins. Of course, what football-inspired space would be complete without at least a few flat-panel TVs?

Brought on board to handle the implementation of TVs and other technology, the custom electronics (CE) professionals at Premiere Audio Video Services, Mount Pleasant, Pa., blanketed one wall with five high-def LCD TVs-one 52-inch Sanyo display and four 27-inch Toshiba sets (another flat-panel TV is mounted at the bar). On an adjacent wall they mounted a 100-inch Draper screen, which received its images from a ceiling-mounted Sharp projector. Each TV can display a different game; the owners use an RTI T2-CS+ remote with companion processor to choose which game goes to which TV (supplied by seven DirecTV receivers) and to select which game they want to hear (the audio plays through the chosen TV's built-in speakers).

If either the Ravens or the Redskins are playing, the owners might direct that game to the 100-inch screen and Bose 3-2-1 audio system... and with a press of a button rotate the seating area to face the larger-than-life football action. A hydraulic system swivels the floor; Premiere's Vince Zaccaria devised a way for the RTI remote to operate the motors so that the owners can command the floor to spin without getting up from their seats. Although the 100 incher is the preferred display for watching their faves, the owners would rather not see it when it's void of football video. Zaccaria admits that motorizing the screen to roll up into the ceiling would have been the obvious solution, but the overriding goal was to make the space unique, so instead a retractable door, again motorized to move on command from a remote, closes over the screen when it's not being used.

Get a peek at 12 security solutions that work in conjunction with the web.

Digital Signage on the go with these content display digital signage apps for your mobile device.

The Road to Success Is Paved with Service
END_OF_DOCUMENT_TOKEN_TO_BE_REPLACED

Jabra PanaCast Review - Get Your Huddle On
END_OF_DOCUMENT_TOKEN_TO_BE_REPLACED