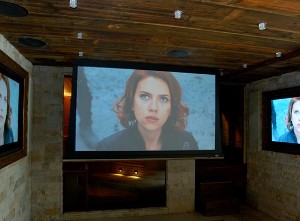 It may be the ultimate man cave. It even resembles a cave, decked in granite walls and floors. But this 800-square-foot New York City apartment boasts not one, not two, but three big-screen Samsung HDTVs, plus a 106-inch drop-down Screen Innovations display served by a $15,000 Wolf Cinema near-4K projector. And you can view them all from the motorized, roll-out bed. To which point you may ask: Why? And the best answer may be why not. The apartment owner is a doctor whose office is next door, and who can access his secret A/V lair with a keypad or his smartphone to open a hidden door in a bookshelf. One is immediately greeted with what appears to be two large art pieces of art. Home electronics designer and installer Todd Anthony Puma of The Source Home Theater Installation & Design in New York City reaches for a URC MX-6000i RF and Wi-Fi remote, and with a touch of a button, the Vutec ArtScreen artwork in the facing frames roll up to reveal two 55-inch Samsung LED HDTVs. At the same time, the button rolls down the 106-inch Screen Innovations Gamma Screen and fires up the Wolf Cinema SDC-15 projector, which can shine a 3840 x 2160-pixel resolution (near 4K) using JVC's D-ILA engine. The projector is tucked into a ventilated space above the rollout bed, along with two Paradigm SIG-1.5R in-ceiling speakers, which are wall-mounted behind rectangular grilles to achieve rear-channel surround sound. But back to the question: Why or why not? This doc likes his technology - so much he keeps updating the system. He also wanted to be able to watch TV from inside his sauna, located behind the drop-down screen and behind glass. With the two TVs in the side walls in the adjoining lounge, he and a guest can face each other and watch the tube. Or they can view the 46-inch Samsung TV mounted behind a mirror while soaking in the hot tub, which is couple of steps up from the main lounge area. Three Zoned Spa Did we not mention there's also a sauna and hot tub? The multiple video screens are enough to distract one. There's also a steam room in the bathroom - as well as an electronically operated Kohler shower and Toto Neorest toilet that can be remote controlled. Speakers for the sauna are tucked below the teak benches and floor and use Ixos extreme temperature cables. Here URC's MXW-920 weatherproof remote is used. Three zones of audio - the main lounge/bedroom, hot tub area, and sauna - are served by a NuVo Grand Concerto multiroom audio system, with a NuVo touchscreen and iPad apps for control. Puma also went to pains to make use of the URC MX-6000i remote simple, by making nearly every function in the spa-partment available from one page. Hard buttons are labeled for different areas, and holding down a button can turn on one system or another. More detailed controls lead to other pages. The Kohler shower operates independently, but Puma and URC are looking at ways to integrate the sauna, hot tub and other amenities. URC is also controlling the Lutron lighting switches and dimmers, which Puma programmed to offer ceiling halogen lighting, rectangular backlit marble cubes and colored LEDs for effects. Three Systems, Nine Speakers The biggest technical feat, however, may be the in-ceiling speaker layout in the main lounge and bedroom, which must serve the 5.1-channel front-projection system, as well as the two facing Samsung TVs that each get 6.1-channel treatment. Nine of the Paradigm SIG-1.5R in-ceiling speakers are used to create surround sound for the three separate systems, including the two mounted in the wall and framing the Wolf Cinema projector for the surround channels in the 5.1 system. The other seven are in the ceiling, with rows of three located above each TV for their front and rear channels and one in the center that serves as the center channel for the 5.1-channel front projection system. The left and right front channels for that system utilize the other speakers in the configuration that are nearest the screen, while a Paradigm Sub 12 subwoofer fires from the round grille behind the steps to the hot tub area. That area gets two speakers. The systems are governed by an Anthem MRX-700 A/V receiver for the TV systems and a Marantz NR1602 receiver for the front projection system, with automatic switching so a speaker isn't being powered by both. When both TVs or all systems are on, all of the speakers go into multichannel mode with dialogue coming through them all. The good doctor did not want each video display to act independently, though. If used together, they all show the same video. The systems are accompanied by a Marantz UD5005 Blu-ray player. These components, plus Panamax Furman's BlueBolt system that allows energy monitoring and remote reboots, are located in a rack behind a glass door off of the hot tub room. The Source Home Theater Installation & Design also equipped the spa-tacular digs with industrial-grade broadband, using a commercial version of Verizon's FiOS, plus Apple AirPort Extreme. A security panel with remote controlled digital locks on an exterior door can be opened by the owner via his smartphone.