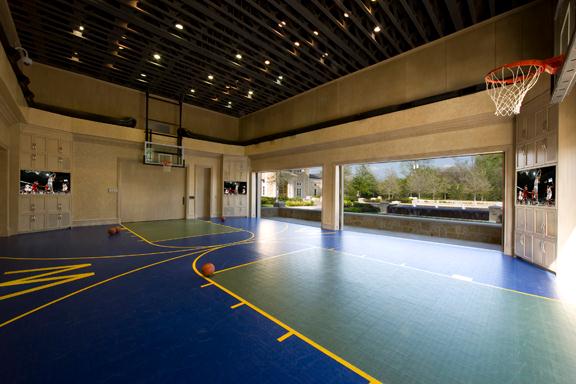 Just in time for March Madness, we’ve found some of the most electronically tricked out home basketball courts around. Equipped with flat-panel TVs, the owners of these electronically-enhanced spaces can perfect their free throw form while watching one of this month’s match-ups. Many of the courts have multiple screens, so viewers can watch different games simultaneously. Given the sheer size of these areas, most are equipped with several speakers—built high up the walls for protection against zinging basketballs—to fill the area with audio. Game commentary can be replaced with music at the touch of a button.

One of our featured courts also has the ability to function as a home theater. Theater seats near the back of the room stand ready; the transformation begins when the owners touch a button on their home control tablet. That command triggers motorized installed in the ceiling to lower a screen and projector into the room.

Of course, lighting is an important element when playing ball or watching movies. The same controller that commands that audio and video equipment can also operate the lights—warming them up before players enter the court, in one case; fading them out for a movie in the other.

Digital Signage on the go with these content display digital signage apps for your mobile device.

TechDecisions’ Most Notable Products of 2014

Recommended by industry leaders, here’s a list of eight notable products that stood out last year.