By Aaron Logan
When you need to work with people across the country, it’s time to think circular.
Tweet 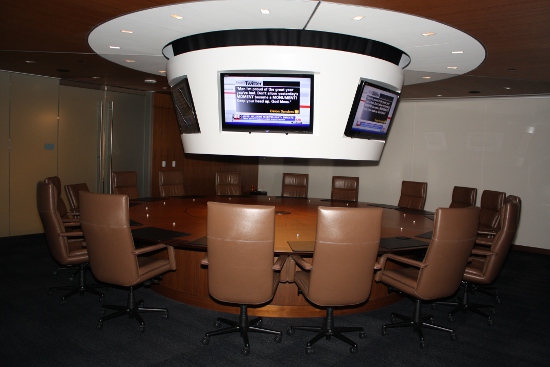 When you’re an energy company in Texas, it’s important — and rather challenging — to stay in close communication with your critical team members mining natural resources along the Gulf Coast, Mississippi River, and Rocky Mountains.

Videoconferencing is becoming standard in corporate projects, says Aaron Logan, project manager for the Dallas branch of AVI-SPL, which handled the integration, but he says Denbury’s goals were “very aggressive” and “ambitious.” That being said, Logan thinks many corporate customers will soon start thinking along these lines.

“Denbury made it unique by opening up multiple sites in one office that will allow access and ease of use to its employees,” he says. “I believe as time goes on, we will see this use of [videoconferencing] become more typical for companies. Denbury is essentially ahead of the curve and ready for a world where traveling becomes less of a reality and more of a luxury.”

For Denbury, the priority isn’t to be an early adopter; it’s more about the videoconferencing facilities making good business sense, according to its network engineer Steve Shanks. “Our company is widely scattered throughout the southern and northern area of the United States. We find it much easier to have live meetings with groups that involve multiple locations at the same time. This allows us to save on the cost of sending multiple people to remote sites that do not have easy access to an airport.”

Smart business move notwithstanding, Denbury earns some big technology points with the solution in its executive boardroom, a circular room with what Logan describes as a “jumbotron” videoconferencing monitor hanging above the roundtable.

Among the six dedicated videoconferencing rooms recently built at Denbury’s headquarters, the solution in the executive boardroom is the centerpiece — in more ways than one.

In a round room with a circular table, Denbury didn’t want to require team members to turn and focus on a traditional, front-of-the-room display. Enter the jumbotron solution, which Logan says is a custom-built, round structure that holds six monitors, each aimed at the outer portions of the table. The six Sharp LED back-lit LCD LC-40LE700UN TVs are sunk into the structure.

Even more impressive, Logan adds, is that the structure “will raise and lower by simply pressing a button on the Crestron control [panel], which controls the Draper Torque Star system.”

It takes a coordinated effort to provide such a unique solution. The jumbotron structure is made from aluminum box truss with custom wood attached to it, Logan says. AVI-SPL design engineer Greg White was instrumental in creating it, largely based on digital 3D models generated by project specialist Steve Phillips.

“The room was very challenging,”says Logan. “Our team at AVI-SPL did a great job working with the architect, general contractors and Denbury to get this completed.”

Besides the setup in the executive conference room, the other five videoconferencing rooms at Denbury aren’t shabby either. On the surface, they’re pretty typical solutions that allow for audio and video presentations, plus audio and some videoconferencing, Logan says. They’re also “very forward looking.”

The entire Denbury solution is based off of Crestron’s DigitalMedia platform, which “allows Denbury not only to present with analog signals, but also ensures they are prepared and ready for a digital future,” Logan says. Each space is controlled by a Crestron automation system, with either 10-button wireless keypads or 8-inch wireless touchpanels. Denbury employees can also control the systems through their Apple iPads.

“It’s truly the future when you can walk into a room with your digital tablet, touch your screen and turn on your projector, lower your screen, lower your lights and project your presentation,” says Logan.

Of course, it’s even more impressive that when that room features a 360-degree videoconferencing jumbotron.

This article was originally published by our content partner CorporateTechDecisions

7 Ways Your Boss Is Watching You at Work

Let's spy in on seven options that can provide a peek on employees during the workday.

Keep Tabs on Your Business with 4 Pro Finance Apps

Track your expenses, business transactions, and contract deadlines with your smart device.

Videoconferencing apps mean face-to-face communication, content sharing and real-time annotation of the documents you need to do your job.