By Dan Daley
A Florida teacher uses a combination of iPads, apps and projectors to increase social interaction and improve academic performance in students with Autism.
Tweet 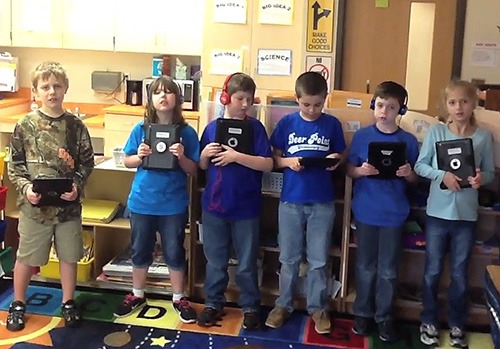 Will Weatherly spent eight years working in the Florida Dept. of Corrections watching kids as young as 13 being put behind bars. It was enough to prompt him to go back to school and get a dual degree in general education and special education, which led him to Deer Point Elementary in Panama City, Florida where he’s been working with autistic children for the last four years. He’s watched his kids make progress, but once he made a connection with some A/V products the results have gone from good to spectacular.

Weatherly noticed that autistic children seemed to have an easier time interacting with computers. “A computer is non-judgmental and you don’t have to make eye contact with it, and those are important aspects in a relationship with autistic children,” he explains. “They feel freer to interact with something like that.”

However, managing an autistic child’s interaction with a device is not simple—as anyone who has sat on a plane, train or (yikes!) an automobile lately has noticed, watching people texting away, eyes riveted to the screen, typical mobile devices can quickly create an immersive virtual world, one that can draw socially challenged youngsters in deeply and away from learning the social interaction skills they really need. So two years ago, Weatherly brainstormed and made the connection between a mobile device—he had an Android-powered Motorola Zoom at the time—and an app called Nearpod, which enables teachers to control each individual device from their own device and is loaded with learning programs in math and language. Via Nearpod on a wireless tablet, teachers can administer quizzes, questions and lessons simultaneously to students who each have their own tablet in the classroom. The tablet’s software also assists in developing communication skills in autistic students with speaking disabilities.

The results were immediate and significant. “The kids’ levels of engagement shot straight up,” he recalls. The app and the wireless iPad—Weatherly says Apple’s iOS is better suited to the classroom environment (and a generous parent donated 10 of the Apple tablets for his class) while other parents chipped in for items like AppleCare—let him interact without the intimacy that often scares autistic children. It has other benefits, as well—it lets him know if a student has become distracted or has shut down and disengaged, letting him turn his attention to that child immediately. It also lets him know if one of the students wanders off out of the classroom, by showing that he’s out of range, or if the iPad is turned off or goes to sleep. In fact, one of the more important accessories is the Trident Kraken A.M.S. iPad cases the school has also acquired, to guard against damage from dropped tablets.  “I can use the iPad and the app to poll students on ideas, test them and make sure they’re part of the group,” he says.

Beyond the iPad, Weatherly is using a VGA input on the projector. He’s planning in the near future on using an Apple AirPlay as a content sharing process, but either form of connectivity encourages social interaction. “When we want the kids to show their work to the others, we’ll bring them over and have the content from their iPad uploaded through Airplay to the Epson ceiling-mounted projector we have in the classroom,” he explains, “That projects onto a Mimio whiteboard. Again, it’s a way of interacting that has the A/V technology acting as a non-judgmental buffer between them, but still lets them see each others’ work.”

Weatherly says the increase in academic performance, social interaction and personal confidence has been remarkable. “It’s pretty amazing,” he says. “You can see the difference in them.”

Click on the images below or the "next" button to see the ways the iPads are making an impact.

Jabra PanaCast Review - Get Your Huddle On
END_OF_DOCUMENT_TOKEN_TO_BE_REPLACED