By Matt Whitlock
Our mini product roundup focuses on innovative projector technology that puts pizzazz in the product category.
Tweet

Projectors are one of the few tech categories in which the documents displayed by the technology are immensely more interesting than the hardware itself. Seeing a bright and beautiful PowerPoint presentation at a width of 120 inches in a conference room can be impressive, but few in the audience would pay attention to the hardware that put the images on the screen. After all, a projector is nothing more than a box on the table or ceiling with a light.

Projectors get about the same level of love as a typical PC monitor, because it’s difficult to distinguish one from another in each product category—they look the same and offer roughly the same features. Of course, there are a few interesting models here and there, but for the most part, they fade into the background and let the content be front and center.

Thankfully, due to pressure from giant touchscreen LCDs, projector makers have had good reason to step up their collective game. Here are a few new projectors that offer a little something special—be that interactivity, portability, or flexible connectivity—that makes them stand out in a sea of “regular” models. 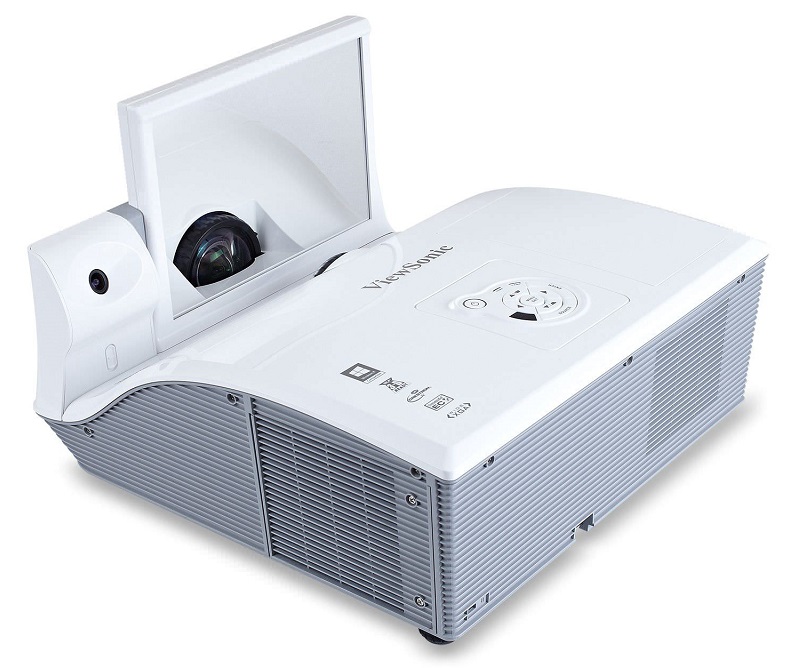 ViewSonic Corp. wowed attendees (and the ChannelPro Network team) at the April 2014 ChannelPro SMB Forum with its PJD8353s XGA DLP projector. It’s an interesting-looking projector to start, and it’s one of the ultra-short-throw models that can display a 70-inch image when it’s a mere 2 feet from the wall. The image is a bright and bold visual treat, thanks to the 3,000-lumen lamp, six-segment color wheel, and other features. It’s even 3D.

The real wow, though, comes from its dual-pen interactivity package: Two people can control and interact with the projected image. Although it’s now fairly commonplace to see people touching and interacting with large screens, watching someone move windows and click icons on a projected image is really a sight to behold. Bonus: The whole package costs less than $2,000 MSRP, which puts it in a new class of affordable from other interactive SMB solutions.

See more in Innovative Projectors with Style and Substance:

Features like pre-loaded educational apps and rugged design can help your education clients (or your own students) get the most out of their tablets.

Our mini product roundup focuses on innovative projector technology that puts pizzazz in the product category.

Jabra PanaCast Review - Get Your Huddle On
END_OF_DOCUMENT_TOKEN_TO_BE_REPLACED