Four Facts of Life for the Channel Today, According to TD SYNNEX Partners

By Rich Freeman
Though speakers and attendees at this week’s meeting of the distributor’s TechSelect partner community report rock-solid growth, supply chain woes, resulting cash flow challenges, and the looming prospect of a recession are all on their minds.
Tweet 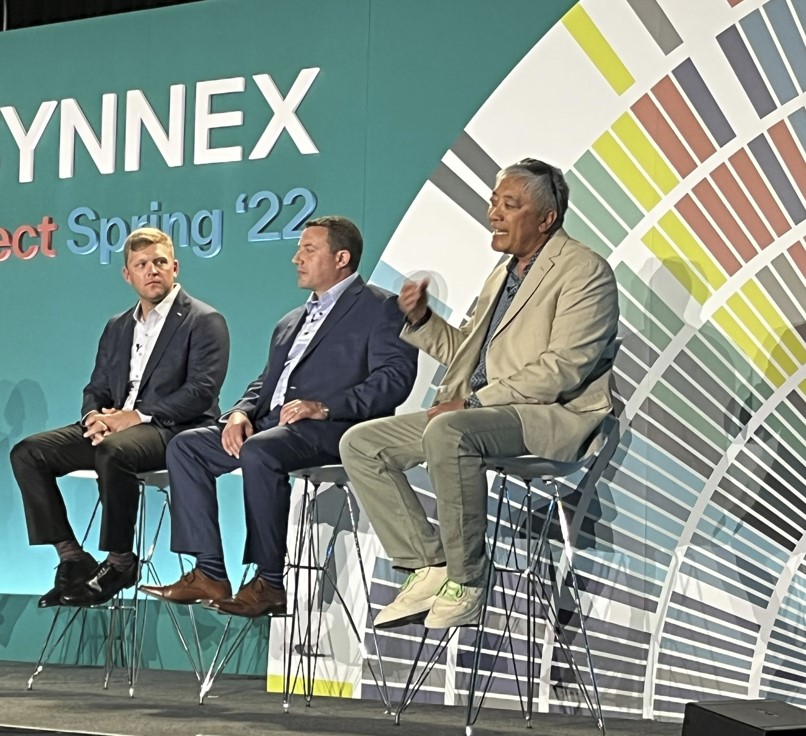 December is always a big month for sellers of tech gear, thanks in part to holiday season purchasing. January, on the other hand, is normally much slower. Not so much this year, though, at least for TD SYNNEX.

“We had a really fast January,” said Steve Jow (pictured far right), executive vice president of U.S. sales, during a panel discussion yesterday. “And it really hasn’t stopped. So from January all the way to here, it’s just been just an upward trajectory.”

Credit the increasingly mainstream status of hybrid work arrangements for some of that. Over 40% of employees will work offsite at least one day a week next year, according to Gartner, and the result, Jow says, are “dual infrastructure” deployments of hardware and software in both offices and homes.

“We’re seeing strength along devices, the accessories, all along the edge, computing, storage back at the enterprise to support those devices,” he notes. “Wrap security around that and you have more demand.”

True, observed Jow’s colleague Anthony Tanoury, vice president of product management for Lenovo systems at TD SYNNEX, global PC shipments dipped 5.1% in the first quarter of the year, per IDC, and reduced purchasing in the education market means that Chromebook sales will probably be flat or even down in 2022. Yet analysts expect buyers to snap up more than 30 million Chromebooks this year just the same, and the downward trend in PC sales follows two years of double-digit growth.

“If you look at [education] and consumer spending, it’s slowed a bit, but demand for commercial PCs is pretty strong,” Tanoury says. “The opportunity there is still huge.”

Indeed, Lenovo’s PC and smart device group is coming off its fourth consecutive fiscal year of record growth, with SMB revenue specifically up 25%, according to Rob Cato, vice president of North America for the hardware maker’s channel business, during a keynote at the TechSelect show today. Fellow TechSelect sponsoring vendor Dell Technologies is seeing continued momentum in sales of client devices too, and TD SYNNEX remains bullish on the future.

See more in Four Facts of Life for the Channel Today, According to TD SYNNEX Partners:

The power quality vendor has cloud-based management software and a new partner program for MSPs coming this year, and sees great things ahead for edge computing, artificial intelligence, and software-defined infrastructure beyond that.

Tech Data Is Investing in Next-Generation Technologies and Digital Transformation

15 months after its bold acquisition of Avnet Technology Solutions, Tech Data is charging ahead on efforts to re-define itself as a provider of end-to-end products and services.